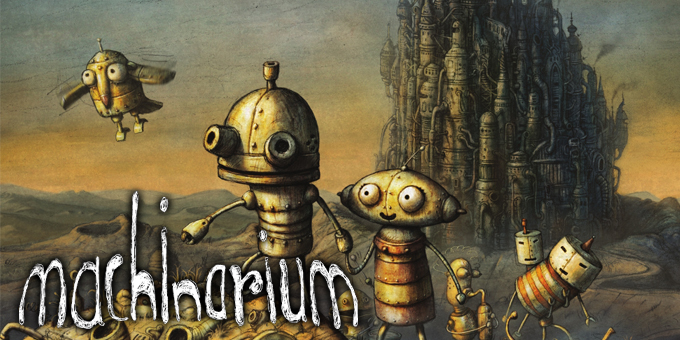 Picture a world where people don’t exist. Okay, they do exist, but they’re not people, they’re robots (so not really people, then, but you know what I mean.). In this world, the peop- er, robots go about their daily lives, doing…robot-y things like, um…okay, you know what, forget the highfaluting introduction. Stop reading this inane drivel and go buy this game.

I think I may have said this before about some other game, but that’s irrelevant. Did you enjoy that game? Of course you did. So trust me.

What’s that? You don’t want to trust me? I swore at your gran? Fine then – if my appeal to your trust won’t work, let me appeal to your senses. Just look at this: 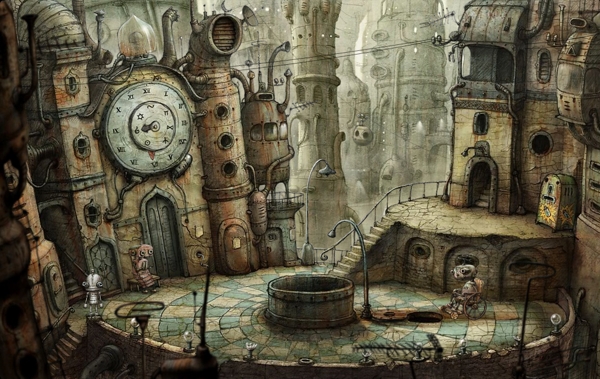 Look at it. LOOK.

Tell me that this game is not absolutely beautiful…and thankfully it’s as awesome as it looks.

Machinarium is the latest thing to arrive from the guys over at Amanita Design (You know, those awesome people behind the awesome Samorost games) and no matter which way you look at it (and really, just look at it), they have outdone themselves. You start off your adventure in a scrap yard with no real explanation as to why you’re there; it’s (obviously) up to you to piece things together – starting with yourself. As you make your way back into the massive robot city, you slowly unravel the reasons to why you’ve been scrapped, who is to blame, and what it is you’re going to have to do to make things right again.

The first thing you’ll need to get used to is living without any text and voices to show you what to do – everything is represented visually. Because of this, actions such as “look at”, “talk to” or “give” which we’ve gotten used to in most adventure titles are non-existent; in fact there is only one real action – use. In order to use anything on screen, you have to be next to it, but sometimes even that is not enough…cue epically awesome feature!

By clicking on your character and dragging either up or down, you’re able to stretch him up – allowing him to reach objects higher up – or squat him down – allowing him to reach objects low on the ground. It may not sound like much, but I literally squealed with glee when I saw this happen. Some objects you get to take along with you (which you carry around inside you after swallowing it up, of course) while other objects need to be used in the direct vicinity – but no matter what you’re doing or picking up, interactions are animated beautifully. 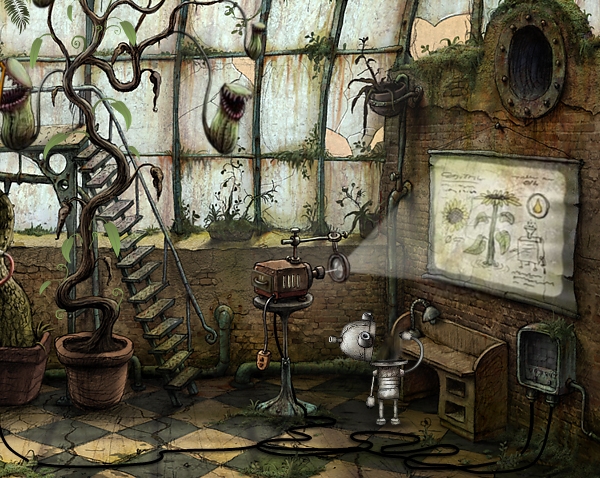 Like humans, robots carry anything of worth in their stomachs.

It’s this multi-layered puzzle-solving that makes Machinarium so fun to play. The bigger quest puzzles in the game are never mind-fryingly difficult, but they’re so well thought out and just so gosh-darn clever that you can’t help but tip your hat to the developers. And if you don’t have a hat to tip, I suggest you go get one.

Even though the quest puzzles may not be the most challenging in the world, there is still plenty to get your head wrapped around. The smaller puzzles in the game require a logical mind (being about robots, this makes sense, actually) and they’re quite reminiscent of the old “Dr. Brain” series. Some of these smaller puzzles can actually be very difficult depending on how quickly you catch on, while others can be solved through random luck (but honestly, you’d have to be really lucky). 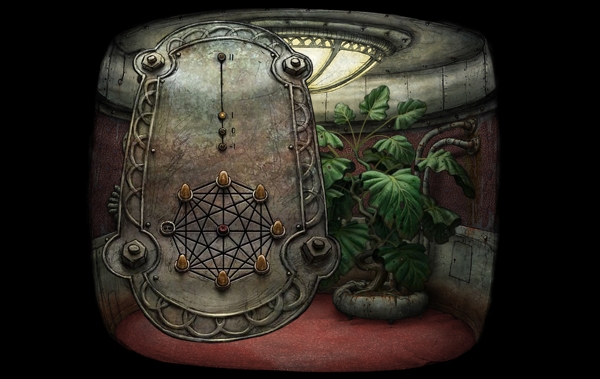 I figured this one out completely by accident

You’ll be happy to hear that if you somehow missed the queue for logic when they were dishing it out, you can cheat. Yes, you read correctly. Cheat. Though is it really cheating if the developers give you the answers?

At any point during the game you can click on the game manual in the top corner, this takes you to the walkthrough. Don’t fret though; while Amanita made it easier for you to cheat, they didn’t make it completely revealing. In order to unlock the walkthrough you need to play a mini-game where you take a little key on a path and shoot spiders. Once that’s done, the book opens only to the page with information pertaining the screen you’re currently on.

Basically, that means you only get to see what to do where you are, and not what to do in the greater scheme of the puzzle you’re working. Very clever. Basically, if you’re really that stuck, the developers have given you a life-line – but the process of accessing it can get tedious – so you might as well stick it out and try to solve the puzzles yourself. You’ll feel better about it in the end.

You can cheat, but remember, you're just going to hate yourself for it in the morning.

So perhaps there should be something here for me to complain about. Perhaps something a bit off, or unbalanced – or maybe something that’s just annoying as hell. Well, there were probably two puzzles that made me swear a bit – but can I really fault the game for my own failure to, well, think logically? If I had to really dig deep to find something to complain about it would have to that you can, at times, feel lost as to what it is exactly you’re supposed to be doing – but this really is a minor complaint because you eventually stumble onto the right path.

I know you’ve probably gathered as much from all my harping on about it, but I really LOVE this game. Whether you’re looking for straight-up adventure juice, or puzzles to wring out your under-used, squishy grey matter; Machinarium provides a whole lot of game to gorge yourself on – and it’s all wrapped up neatly in the prettiest package you’ll likely see this side of the likes of Braid. You might think that $20 (R160) is a bit steep for an adventure game, but you’d think wrong. Actually, if you think that, then you’re probably not smart enough to play this game anyway.

It’s cute, it’s funny, it’s clever and it has one of the moodiest and broodiest soundtracks ever – but over and above everything else, it’s just simply awesome.