Home » Development » Bézier Curves for your Games: A Tutorial 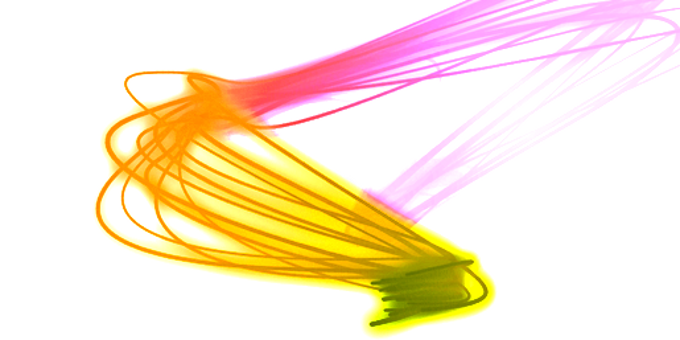 We all know what a curve is. Here are some examples.

In games, Bézier curves are sometimes useful to describe paths: the racing line in a racing game, or the line in line-drawing games such as Flight Control, or the looping butterfly that enlivens an RPG.

Bézier curves are popular because their mathematical descriptions are compact, intuitive, and elegant. They are easy to compute, easy to use in higher dimensions (3D and up), and can be stitched together to represent any shape you can imagine.

In this guide, I give you the instructions necessary to implement algorithms for using Bézier curves in your games.

Here is an example of the simplest type of Bézier curve, a line-segment:

This is shorthand notation for the two equations that give the coordinates separately (see Vector Fundamentals): 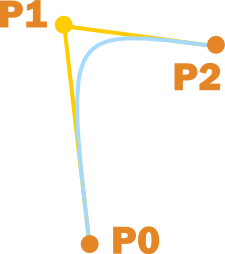 Here is the formula:

Cubic curves (or degree-three curves) are the most frequently used, and so we will discuss cubic curves in this guide. They require four control points, and chances are you are already quite familiar with using them in vector drawing packages (yes, those handles used to change the shape of curves in Freehand or Inkscape are really control points).

The yellow lines are in the same direction as the tangents at the endpoints. The longer these yellow segments, the stronger the “pull” towards the tangent.

The formula for cubic Bézier curves is:

You will rarely need higher degree curves. If you do, the formula is simple, but requires some knowledge of binomial coefficients. You can find the detail in one of the sources at the end of the article.

In geometry, there are always more cases than you first think of, which can lead to subtle and difficult-to-find bugs.

These are all valid 2D Bézier curves:

The degenerate case 5 is the most complex. The following sub-cases are possible:

There is a 6th case that occurs when all four control points coincide: the resulting curve is a single point. Note that the curve does not degenerate to a point when only the end-points coincide: all four control points must coincide. For a technical treatment of this topic, see A Geometric Characterization of Parametric Cubic Curves (1.6 MB PDF) by Stone and De Rose. The article Inflection points of a cubic Bezier explains how to calculate points of inflection, and provides interactive Java applets to illustrate the concepts.

In 3D, loops and overlaps are less of a problem, since they only occur when all the points lie in the same plane – exactly when the curve is 2D. It is still possible for the curve to change direction in 3D (as it does in cases 2, 4, and 5).

When implementing Bézier curve algorithms, carefully consider whether these cases can occur, and whether the algorithm handles them correctly. Be especially wary of coincident control points – trying to normalize the zero vector that might crop up in calculations can lead to a nasty crash.

It is straightforward to translate the mathematical formula to code. In the implementation below, we optimised the algorithm somewhat by storing and reusing partial results.

The code is in C#, but should be trivial to translate to Java, C++ and most other languages.

(The following functions all work for 2D if Vector3 is replaced by Vector2.)

Now that we have a way to calculate points on the Bézier curve, we need a way to draw the curve.

For images, the simplest approach is to use small increments of t to calculate successive points:

This approach suffers from these problems:

More sophisticated algorithms use an adaptive increment (of t) to overcome these problems. Anti-aliasing the curve will even give better results, making the curve appear very smooth and crisp. A good source for drawing curves (and a load of other useful topics) is Computer Graphics and Computer Modelling by David Salomon.

A simpler alternative is to draw lines instead of pixels. This method is also more appropriate for drawing curves using graphics hardware.

Because we need not worry about skipping pixels, we can choose a larger increment and reduce overdrawing. But it is still hard to choose the increment properly.

Another algorithm uses recursive subdivision. It generally gives fewer drawing points for the same level of accuracy than the previous algorithm. However, it does not handle all curves with inflections or loops correctly, and should not be used when such curves can occur.

Here is the algorithm:

The figure below shows a worked example.

Below is the recursive algorithm in code. The tricky part is inserting drawing points at the right place in the list so that they remain in the right order. We check the dot product of normalised segments, instead of checking the angle directly (see Vector Recipes for an explanation of this trick). This check uses a > in the inequality, instead of the < that we would use if we had checked the angles directly.

The following function makes the base call to the recursive function:

An example where the algorithm will give a poor result. In this case, the angle is larger than the threshold, so no subdivision will occur. The resulting line segment is a poor representation of the curve.

When we want to represent a complicated curve, we have two options:

The last type of curve is called a Bézier path. Bézier paths are usually simpler and more efficient to use than higher degree curves, and is the method described here. (Many sources use the word Bézier curve to also refer to what we call Bézier paths, relying on context to make it obvious which is meant. When implementing these curves however, the distinct terms help us give better variable names).

The implementation described here is just one of many possibilities. We define a class, which creates a list of the control points of the Bézier curves which themselves make up a Bézier path. Because the segments are connected end-to-end, the last and first control points of successive curves are the same, and we can omit one of the duplicates. The illustration shows an example of a Bézier path made out of four Bézier curves. In this case, the list contains 13 points, as shown on the left. 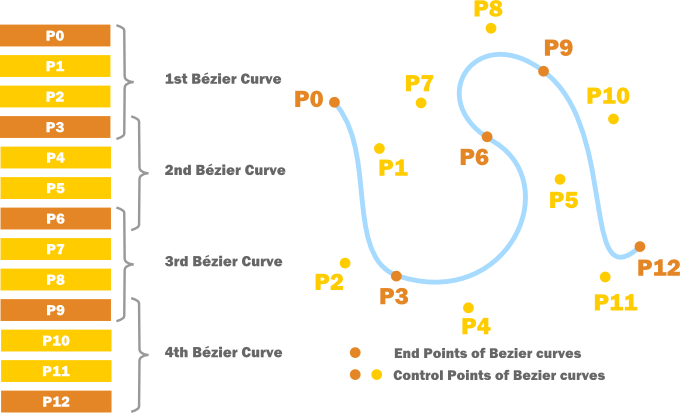 It is easy to use the recursive algorithm to get the points instead. An example can be found in the downloadable code at the end of this article.

When implementing Bézier paths, you can make your life a lot easier by doing the following:

Finally, Bézier curves are great, but don’t use them when a collection of short, straight line-segments will do.

A primer on Bezier curves by Mike Kamermans. This page has detailed descriptions and interactive visualisations of many algorithms, including ways to calculate the bounding box, splitting curves, and extruding curves.

Rendering Vector art on the GPU (Game Programming Gems 3) by Charles Loop and Jim Blinn provides an introduction to rendering cubic Bézier curves on the GPU. Make sure to read the comments. The post Curvy Blues give more details, and an implementation.

40 thoughts on “Bézier Curves for your Games: A Tutorial”