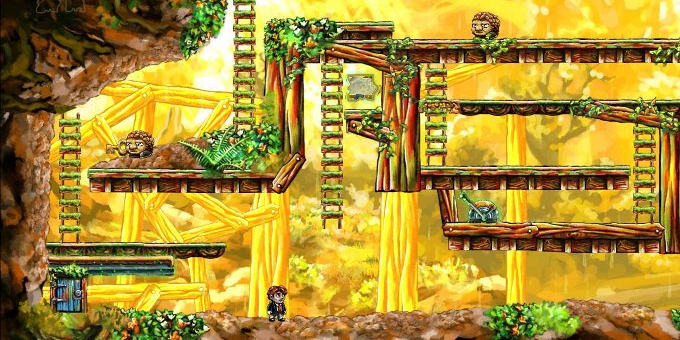 A platformer is a game in which a character runs and jumps around a level consisting of platforms floating in the air. Although this article focuses on platformers, the philosophy behind each idea can be applied to any type of game, whether 2D or 3D. This list does not only include tips for the product (a fun game), but also for the development process.

The more transparent and intuitive the interface is, the better. If drivers on the road had to concentrate on how to turn their vehicles, there would be many more accidents.

The simple interface also applies to the menus and all other interactive sections of a game. It must be easy to navigate between menu items and to select items.

Make it easy for the player to see important things in the game. Platforms that the character can walk on must stand out from scenery in the background. Collectable items must be easy to recognise. One glance at the HUD should give you all the information you need. An easily readable font is a necessity. The player must know what is going on in the menu.

4. Make it easy to jump over gaps 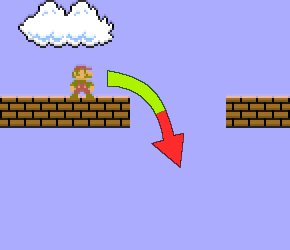 The player can jump when he is in the green area. The larger green area on the right makes it easier to jump across platforms (that’s a good thing).

Traditionally in games – and realistically – a player can only start jumping if he is standing on something. Allow the player to start jumping when he is in mid-air, when he just stepped off the edge of a platform. Have a leeway of about one second in which the player can start jumping. (After the one second he can no longer jump, and continues to fall downwards.) This makes it easier to jump from one platform to another.

6. Provide plenty of power-ups and collectables

Most kids collect stuff, purely because it is fun. That same feeling of joy happens when you collect things in a computer game. Put collectable stuff in the game. The more, the better.

There is no logical reason for it. It is just fun.

Examples of base AI

Flies around in the air.

Walks on any surface: horizontal, vertical, diagonal and upside down.

8. Have a story and atmosphere in mind

Example story: A lone marine fights hordes of zombies and demons on a moon base.

From this story we know what the game is about.

To put it into perspective: If your design document is 50 pages long, and it takes an average of 2 days to implement the features per page, then it will take you at least 100 days to make the game. It is natural to have an initial design doc which does not include everything that will eventually be in the game. More pages will be added to it during development.

It is very easy to think of new features to add to a game throughout the development process. However, every time you add a new feature, you push the release date further away. Continue to add features on a regular basis and your game will never be complete. When you add a new feature, be prepared to take another one away to meet your deadline. Make sure that you prioritise your initial list of features, so that the least important ones can be dropped if (or when) you run out of time.

Do not be ashamed to make a game which has a very limited number of features. The people laughing at you are probably working on an MMO that will take them 15 years to complete.

Remember, one of the most rewarding feelings in the world is to complete a project. 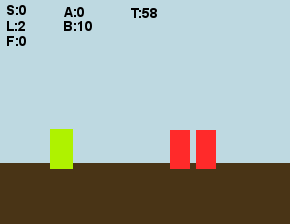 The prototype, with placeholder graphics. The green block is the main character, and the red blocks are the enemies. Compare with the image below.

There are thousands of good ideas for computer games, but not all of them are fun. The best way to find out which are fun, is to prototype the game. The prototype is a quick-to-make and quick-to-change version of the game that helps you to test out your ideas.

Why prototype? It saves you time in the long run. Have you ever had to recreate art or reprogram a system because the design changed as a result of the game not being fun?

To save time, use an existing game engine and download free resources from the internet to create the prototype. The prototype may be done in the same engine used for the final game, and some of the code can be reused. 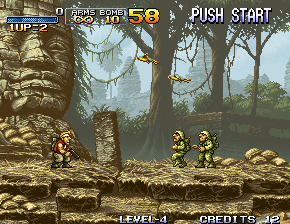 The final game with Renaissance art.

The prototype may also be a completely separate program (or programs) that will be discarded when the final game is in full development. For this reason, there are people who do not like prototyping. They believe it is a waste of resources and time, because the final prototype ‘product’ is discarded. Think of the prototyping as another idea phase of development. During this phase you test out your ideas, change them, replace them, and tweak them, until they are fun. The prototype ‘product’ is, therefore, a tool used for testing ideas.

Remember: Prototyping must also be included in your list of things to do, and, therefore, must be part of your schedule.

11. Involve everyone in the team in the design

The answer is yes. It will also be better for the game.

A game is a creative collaboration. If only one or two people design the game, then it will be creatively limited. People generally feel happier and more devoted to a project if they are included in the design process. Therefore, encourage everyone to be involved in the design process. And it does not always need to be a formal process. In other words, you do not always need to schedule a meeting where everyone is involved. People can send emails, talk in the kitchen, or shout across the room.

42 thoughts on “11 Tips for making a fun platformer”