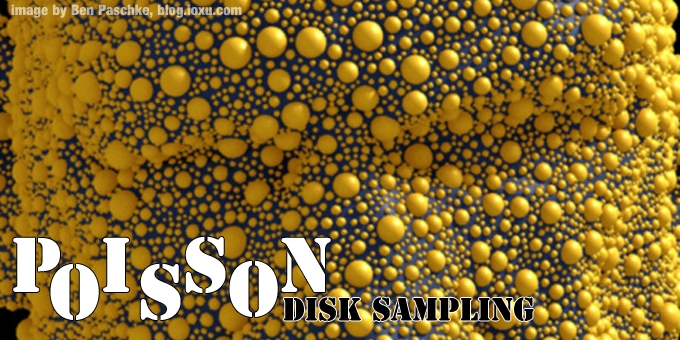 This article originally appeared in Dev.Mag Issue 21, released in March 2008.

One way to populate large worlds with objects is to simply place objects on a grid, or randomly. While fast and easy to implement, both these methods result in unsatisfying worlds: either too regular or too messy. In this article we look at an alternative algorithm that returns a random set of points with nice properties:

Figure 1 shows an example of such a set, which is called Poisson-disk sample set. For comparison, two other sample sets are also shown: a uniform random sample, and a jittered grid sample.

Poisson disk sampling has many applications in games:

In this article we will look mostly at object placement and briefly at texture generation.

There are several algorithms for producing a Poisson disk sample set. The one presented here is easy to implement, and runs reasonably fast. It is also easy adapted for specific applications (described in the next section).

The basic idea is to generate points around existing points, and to check whether they can be added so that they don’t disturb the minimum distance requirement. A grid is used to perform fast lookups of points. Two lists keep track of points that are being generated, and those that needs processing.

Here are the details:

Here is how all this look in pseudo code:

The grid coordinates of a point can be easily calculated: 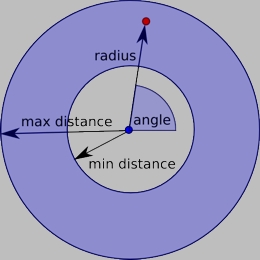 Before a newly generated point is admitted as a sample point, we have to check that no previously generated points are too close. Figure 3 shows a piece of the grid. The red dot is a potential new sample point. We have to check for existing points in the region contained by the red circles (they are the circles at the corners of the cell of the new point). The blue squares are cells that are partially or completely covered by a circle. We need only check these cells. However, to simplify the algorithm, we check all 25 cells.

Here is the pseudo code: 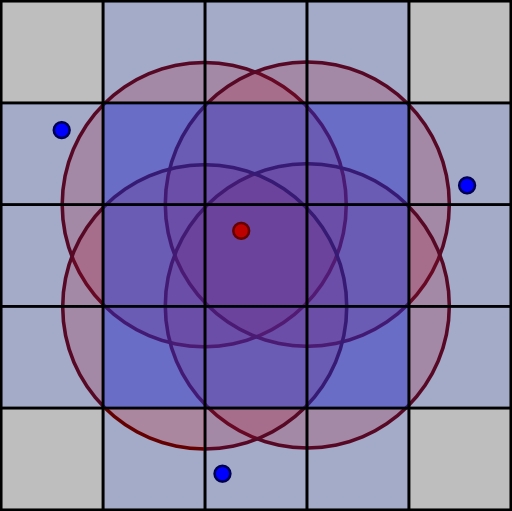 Figure 3 - Checking the neighbourhood of a potential sample point. 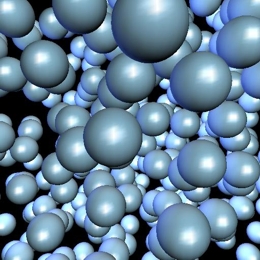 Figure 4 - Spheres placed at points in a Poisson disk sample of 3D space.

The algorithm can easily be modified for 3D:

Placing objects at the positions of a Poisson disk sample set is the simplest way to use this algorithm in games (Figure 5). Ideally, the algorithm can be built into your level editing tool with features that allows the artist to select the region to fill, and the models to fill them with. 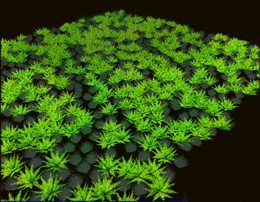 To make this work, you need to modify the algorithm as follows:

As an example, you can use Perlin noise to drive the minimum distance, giving you interesting clusters of objects (Figure 6). This method is especially useful for generating a field of plants. 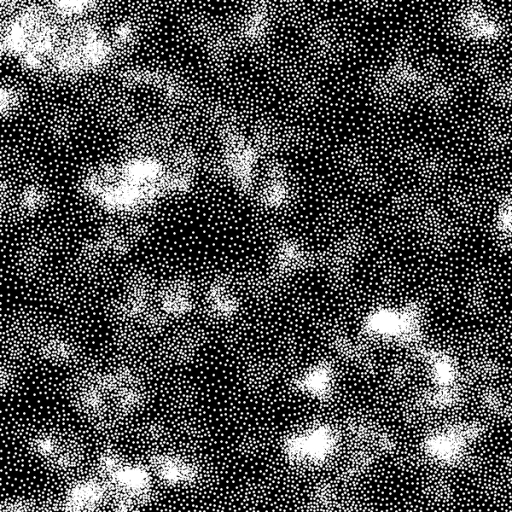 Figure 6 - Poisson disk sample, where the minimum distance is driven by Perlin noise.

When using different radii as explained above, you might run into some problems. Take the following precautions: 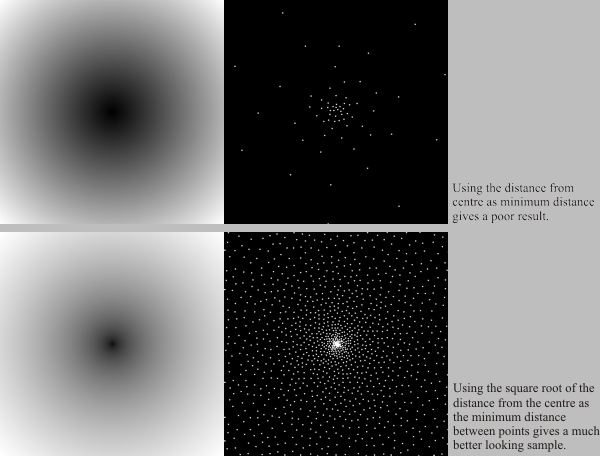 Figure 8 - The high radius is too great; some low radius regions are skipped. 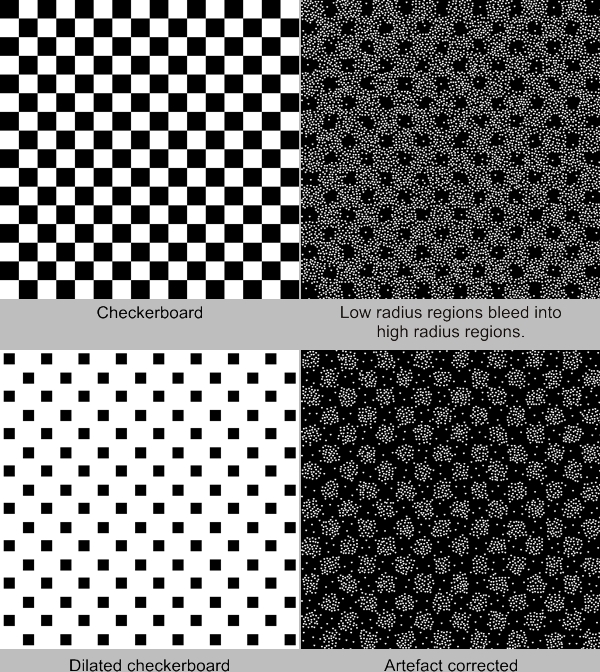 Poisson samples can also be used to generate certain textures. In Figure 10, the droplets on the bottle and glass have been created by combining three layers of Poisson disk sample points.

The modified algorithm creates three layers of points, each layer with a smaller minimum distance between points than the next. In every layer, the algorithm checks that there are no circles in the previous layers. To do this, the look-up grids for all generated layers are used in a final step to eliminate unwanted points.

The local minimum distance of a every sample point is stored, so that it can be used as a radius to draw a circle once all points have been found.

The raw texture is then further processed by clever artists through filters and shaders to produce the final result.

The first texture was produced by painting filled translucent circles for every Poisson sample point, for three separate samples. A different colour was used for every sample set, with small random variations.

The second texture was produced by painting circles for two sample sets; one with filled circles, the other with outlines only.

The third texture was created by painting daisies (randomly scaled and rotated) onto an existing grass texture. 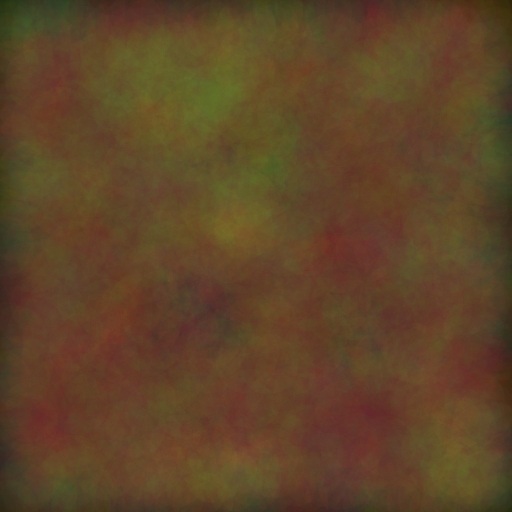 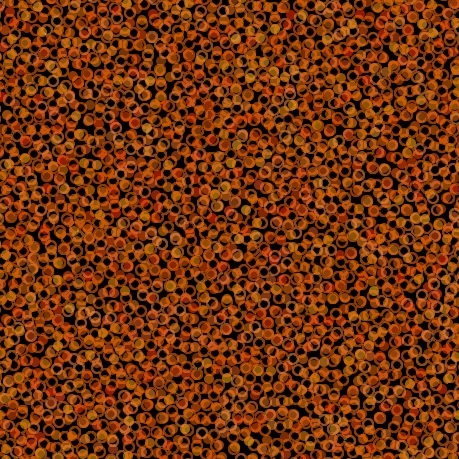 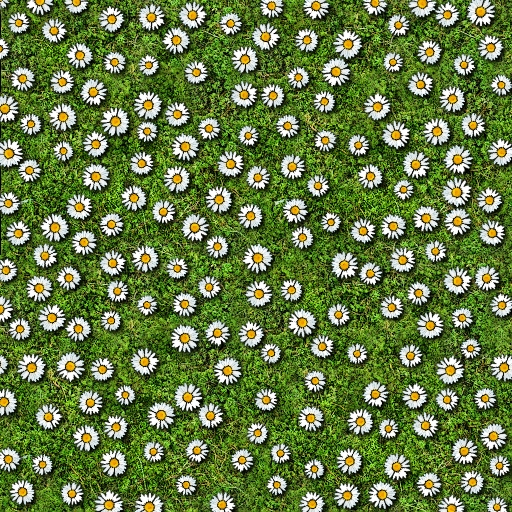 (Some of these links were added after the article was first published).