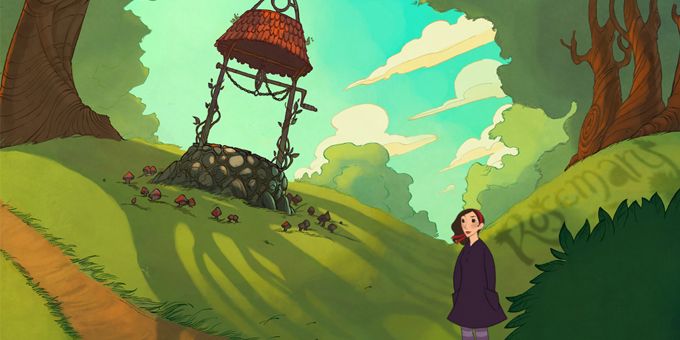 There have been many games that would have ended up on the “games that kicked my ass”-pile if I hadn’t taken to keeping a notepad beside my grubby keyboard. After spending a fair number of hours on them, and even aided by walkthroughs, many old point-n-click adventure games and interactive fiction titles would often leave me struggling to remember what to do next after loading up an earlier saved game.

I then started playing this little indie gem called Rosemary. While I often struggled to remember what to do next in a game, the titular heroine’s brain is proven to be billions of orders of magnitude more powerful than my puny mind.

You see, the gimmick in Rosemary is, in order to solve the mystery of the disappearance of a childhood friend, she needs to delve into memories of her hometown. These aren’t vague, fleeting and abstract memories like yours or mine, but fully resplendent, hand-painted picture-perfect recreations in vibrant colours and even their own beautiful theme tunes. 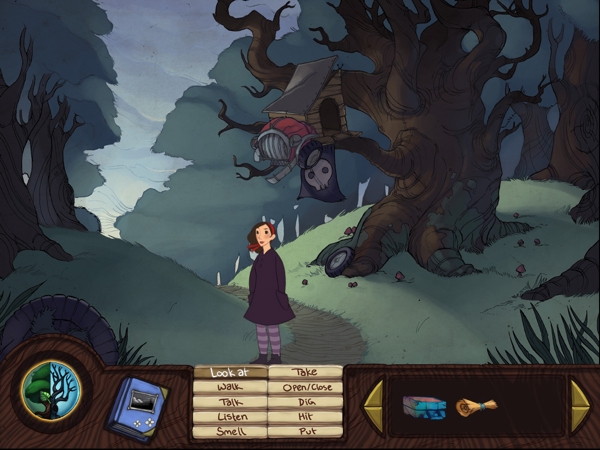 Jealous facetiousness aside, the game appears to be a good ol’ SCUMM-’em-up with the familiar bank of buttons you’d need to use to interact with the world. Familiar, except for the inclusion of verbs like listenand smell. Since the plot is designed to play on memory, these buttons are required considering that any of your senses could trigger a memory.

Interacting with Rosemary’s home neighbourhood may trigger a memory, appearing as a photo, and you then have to place each photo into a photo album. Each photo placed its correct spot will fill the blanks, literally, in the album’s notes section. This is the main driver narrating Rosemary’s past, advancing the story even further. It’s all quite clever really.

The most novel aspect of exploring Rosemary’s hometown is viewing it as she remembers it. A mysterious two-faced tree button in the verb panel actually switches her current dilapidated ghost-town to the older, thriving town of her younger years. 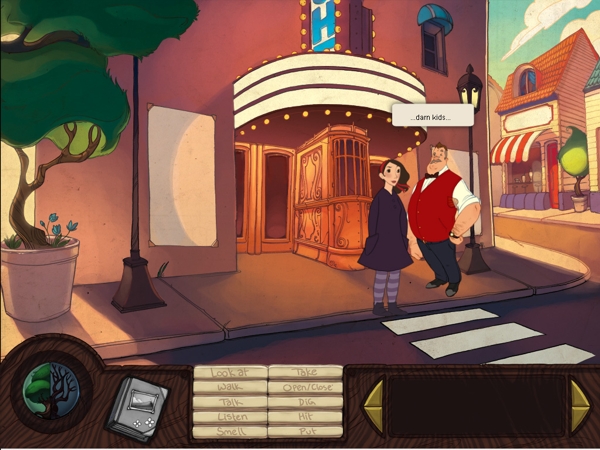 It is mostly here that Rosemary will muck about listening to, smelling and tasting arbitrary clickables until something triggers a memory, often resulting in a photo for her to place but sometimes also making an object appear in the present.

Hiding an object thus until it is “remembered” emulates that object gaining a sudden significance in her mind, while it was something she’d otherwise have ignored before. Also quite clever.

You know what else is clever? The name Rosemary. In the “real world” it is a herb which is most frequently found growing near the seaside and the heroine’s hometown happens to be a seaside town. Rosemary is also a herb that is believed to aid memory and is a symbol for remembrance. Clever. Told you.

It should only take about an hour or so to reach the conclusion. The puzzles are reasonably simple and uninvolving, but it’s clear that quite a lot of love went into Rosemary’s presentation. The visuals all appear to be hand-drawn and the music, while generic and minimalist, actually fits the game like a condom.

One thought on “Rosemary”