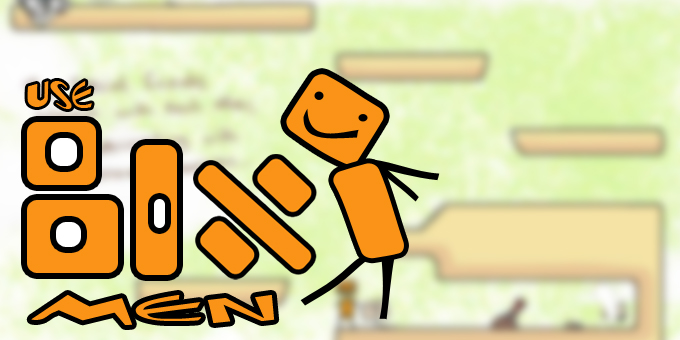 Everything about Use Boxmen says ‘happy.’ The music sparkles in the background, what simple narration exists in the game is silly and smile-inducing and the characters ooze charm out whatever wazoo they might have in their deformed crayoned bodies. It would be such a great setup for a bit of coffee break relaxation. Such a pity then, that it isn’t. What we have here is a deceptive little piece of software designed purely to lure in unsuspecting gamers with its friendly demeanor, and then savagely drop them into some of the most challenging puzzles ever to involve mass stickman slaughter.

Don’t get me wrong, Use Boxmen is great, but this is no sugar dusted cakewalk. Developer Greg Sergeant seems to have a bit of a thing for fiendish difficulty levels, and while Use Boxmen’s initial stages seem almost relaxed, towards the end it shows its true colours. In a similar vein to time-warping puzzler Chronotron, Use Boxmen’s gameplay involves solving movement and platforming obstacles using multiple instances of the player’s character. These instances can do various things depending on what the player is doing at the time of creation, but explaining what they are and how they interact with each other would ruin some of the trial-and-error gameplay that the game favours. The player is guided toward the more obscure interactions by some not-so-subtle flying text on the background (Such as a massive “LEAPFROG ANYONE?” superimposed on the sky). 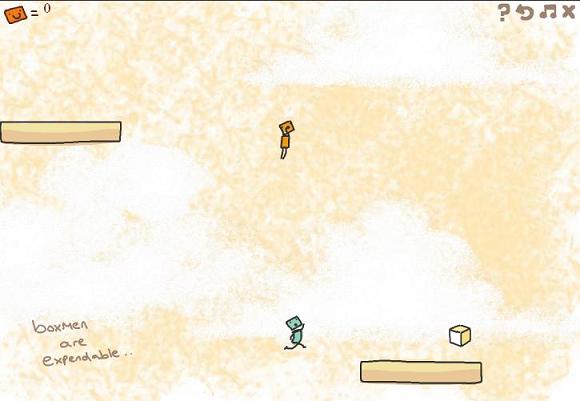 It’s a fairly simple system to get used to, a bit of experimentation is all that’s needed to uncover the various available combinations of the different boxmen. It’s all about learning the tools and different interactions and, towards the end, having a fairly superhuman sense of timing. All the mental gymnastics are complemented by sharp controls and solid platforming, which is a good thing; complexity is the last thing anyone needs in a puzzle game. Not having to worry about whether or not your character is going to make it to the next ledge or plummet to their splattery death off a cliff because of shoddy handling frees up the player’s greymatter to address the actual puzzles.

And in the puzzles we find both the most impressive and the most frustrating part of Use Boxmen: the puzzles. Out of the game’s (pretty tiny) selection of levels, about half are devoted to the tutorial, and the rest are bordering-on-ingenious settings that require all the player’s knowledge of the various interactions. The levels generally follow the formula of; position boxmen. Set off chain reaction. Run like hell to the finish. It’s in that ‘run like hell’ section of the plan that it begins to slightly fall apart. A slight blunder in boxman positioning can mean the player arrives just a millisecond too late to the finish, whereupon giant spiky boxes reappear and obliterate the player’s character into tiny boxy bits. And while there is a reset button to instantly restore the level at the beginning after any spike induced deaths (the player will become very familiar with the R key by the end), this hardly alleviates the annoyance felt as the player accidentally slips off a platform while frantically trying to charge a generator for the umpteenth time. This is a real shame, as the puzzles often require some smart combinations and strategies, and would otherwise satisfy in the actual solving, rather than just giving the player a sense of relief because the ‘Next Stage’ button has appeared. If Seargent had slowed the game down a step, possibly by taking the running speed of the (eternally silly looking) “running boxmen” down a notch, the game could feelmore challenging than daunting. 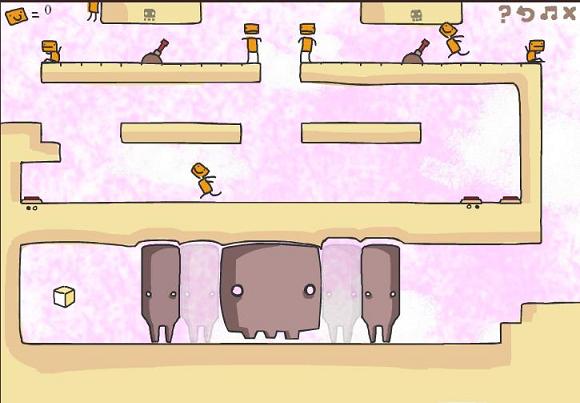 That said, if the ol’ brain is feeling a bit rusty and in need of a kick-start, Use Boxmen is a lot more appealing than yet another Sudoku. Maybe in a sequel with a learning curve that doesn’t resemble a half pipe and some more content (a level editor would be nice) it could be a title that doesn’t repel the casual gamer. But at the moment, it stands as a smart, well constructed and aesthetically adorable niche title.