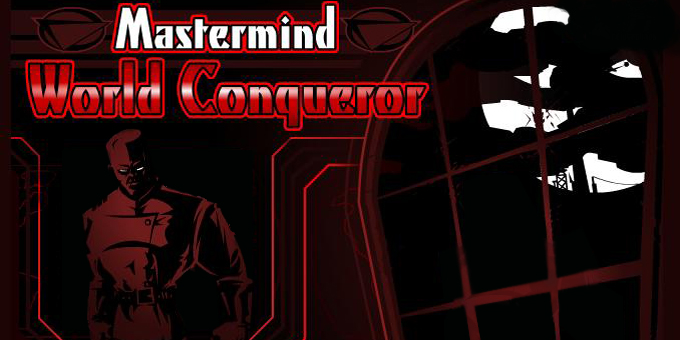 In the mainstream market there has been a lot of focus on moral dilemmas recently. Bioshock asked its players if they would rather save deformed little girls than bump them off for the ability to set their hands on fire. Fallout 3 wanted to know if greed is enough motivation to sacrifice an entire town. Even GTA 4, the game with a heart so black it makes total eclipses seem just a tad gloomy, had a couple of moments that had its audience asking themselves, “Good lord, what have I just done?” (Although admittedly the poignancy of these moments is dulled slightly by the amount of moments where the players just giggled and said “Did you see his head go under that truck?”)

But just as the gaming community is getting used to its first person shooters developing a conscience, along comes Michael Swain and his latest project, Mastermind: World Conqueror, which gathers their morals and grey-areas and tosses them all into the shark pit with a maniacal giggle. At its heart it is a relatively simple strategy game in the Evil Genius vein. The player takes the role of the Mastermind, sitting upon a throne of cruelty and performing crimes to fund their quest to Destroy The World (Bwahahaha)! Gameplay revolves around planning crimes to advance through the ranks of infamy. A number of options are available; pilfering cash from vulnerable venues around the globe or blowing up major cities, but, most importantly, stealing scientific research. As the player climbs the twisted “Science” tree, he grants access to those slightly more complex weapon systems or defenses (equipping peons with flamethrowers is a great way to dissuade nosy superheroes). 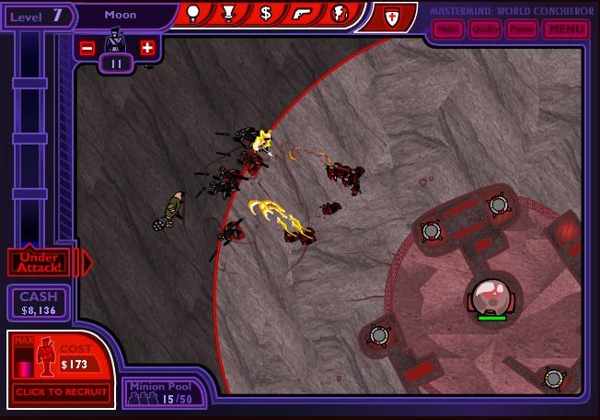 Could there be a warmer welcome than a burst of napalm to the face?

Could there be a warmer welcome than a burst of napalm to the face?

The game gives the player a lot of freedom to mix these upgrades around with the different villainous sidekicks to defend their base, and defend it they will need to do. As the world becomes aware of their iron fist reaching out to smash everything they hold dear, they will retaliate with increasingly powerful, and bizarre, units. And on top of having to send their armies of railgun-wielding minions after the ninjas stabbing their turrets, they have to sacrifice and scheme, destroy and devastate, and wring their evil book shop business for every last ill-gotten penny. Being a tyrannical overlord is hard work.

It’s not hard to see that Mastermind doesn’t take itself too seriously. Its tongue is so far in its cheek it’s poking out the other side and making silly faces at today’s terrorism obsessed media. It’s satirical, it’s often funny and it is extremely well put together. There’s something charming about a game that allows its players to upgrade to “Child Labour” for a bit of a cash boost. The difficulty, or rather the easily accessible lack of it, makes for a very appealing experience to any player. Mission success or failure is detailed in crudely entertaining cutscenes, filled with just the right amount of silly accents and the odd dirty joke. Even the usually annoying event of having your base overrun and essentially losing the game is lightened by regular checkpoints and a fun line or two of banter between the Mastermind and those determined to bring him to justice. Swain has created a gem here, something that deserves a lot of attention and at least two play-throughs to fully enjoy all his jokes and strategy combinations. Nothing quite livens up those slow Sunday afternoons better than snuggling down on the ol’ moonbase, or planting a nuke in London for a bit of excitement.