This article originally appeared in Dev.Mag Issue 29, released in February 2009.

Last month we covered some of the very basic ways of testing whether object A hits object B. But, while the techniques we covered could quite likely take you very far, you’ll inevitably encounter a time when they simply aren’t enough. So this month we’ll go a little further.

Occasionally, you’ll need slightly more information from your collision tests. Many physical applications will require the precise coordinates of the intersection between lines. Thankfully, this is the easiest test to get that information. 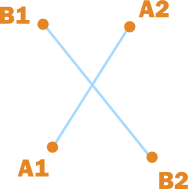 Referring back to last month, we had defined Pa and Pb as points on the respective lines that we were testing as below:

We then solved for points \(u_a\) and \(u_b\), or, rather, simply for their denominators to determine their existence. To calculate the precise point of intersection, you’d simply have to calculate and substitute one of these values into the equations for \(P_a\) or \(P_b\) (it doesn’t matter which, they’d be identical) to get your answer. Adjusting our code from last time results in the following:

This is another common test that should find a use in many games. Did your ball collide with the wall of the level, or a barrier set up by the enemy? Things like that require a circular object to be tested against a line. 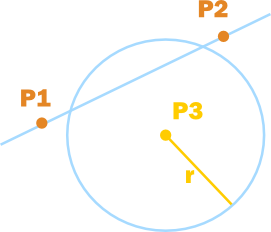 This test involves slightly longer equations than previous intersections, but is still in familiar algebraic and geometric ground. And, in fact, the expressions may be simplified greatly by the simple act of working in the circle’s local space, effectively removing all circle-centre variables from the equations by setting them all to zero. This is achieved simply by expressing the two coordinates representing the line as positions relative to the centre of the circle. Doing this makes your calculations and equations far simpler.

Using the familiar equation, we define a point P on the line as:

And we define the sphere centred on the origin as:

Substituting the equation of the line into the equation for the circle results in an equation in the following familiar form:

Recalling some old high school algebra, the solution to such a quadratic equation is determined by the quadratic formula:

And the existence of a solution is defined by the delta, or the expression under the square root:

In pseudocode, this technique may be implemented as follows:

That’s as far as we’ll go for this tutorial. The above techniques should be able to solve most of your problems. With clever application of the line-line segment intersection test, you could even determine the intersections between any polygons, even transformed ones. Most specific problems have more efficient solutions, but that one can solve most of them in a simple, though perhaps inefficient, way.

Good luck, and make great games without needing to compromise collision accuracy anymore. And remember, when in doubt, as long as it looks fair to the player, you can usually get away with a few tricks.