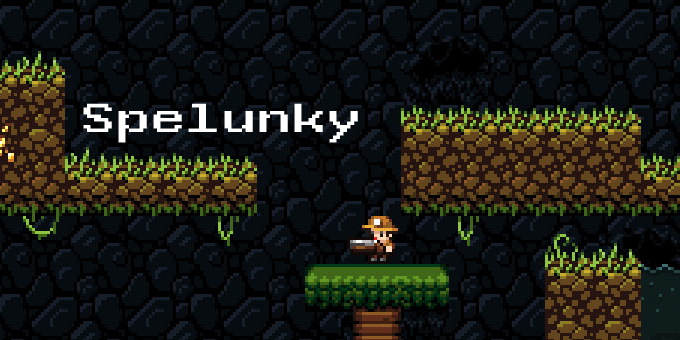 Sitting down with Derek Yu’s latest creation, I had some pretty high expectations. After all, we’re talking about the guy behind stuff like Aquaria, I’m O.K. and TIGSource. I’m happy to say that I didn’t walk away disappointed. In fact, it was difficult for me to walk away at all.

Spelunky is a 2D platformer that has the player exploring caves, fighting monsters, saving damsels and recovering ancient treasures. Although it plays out like a standard run-and-jump action game, its procedurally-generated environments and challenges make it a Roguelike at heart and offer players a level of depth and replayability that’s uncharacteristic of the genre. 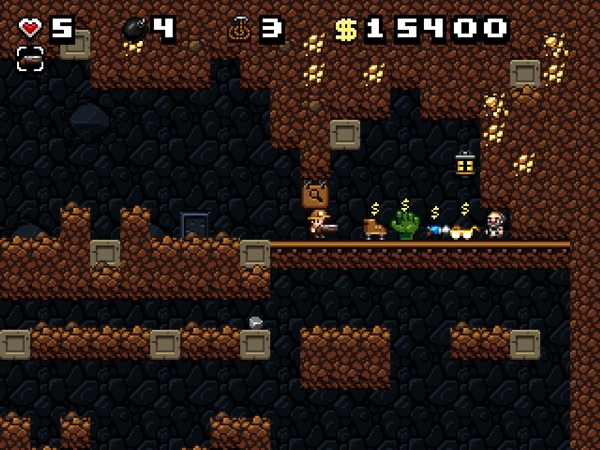 Like Yu’s older title, I’m O.K., Spelunky has a distinctly retro feel to it: pixel art, cheesy sound effects and deceptively simple gameplay are the order of the day, and are used brilliantly to evoke a sense of gaming nostalgia in veterans and bring focus to the core mechanics of the game rather than the technology used to create it.

For the starting player, Spelunky is engaging enough: equipped with a trusty whip, some climbing rope and a couple of bombs to help you blow up cave walls, you go level-by-level through a randomly constructed game world in the tradition of classic platform adventuring. Monsters, treasure chests and dungeon traps abound, but players are also offered extras such as equipment shops, nifty pickups and once-off set pieces that can do anything from providing a whack of extra score to unleashing a horde of spiders on the player.

In fact, a game which appears to be remarkably simple on the surface turns out to be very finely detailed in just about every aspect, and this becomes more evident with each replay. The game is by no means designed to be beaten the first time around: rather, players are required to learn about and deal with set pieces and situations through a mixture of trial-and-error and careful decision-making.

Spelunky could very easily have been an unremarkable title, designed to be played once or twice and quickly forgotten in the deluge of simple platformers out there. This game, however, demonstrates two important principles in game design: good research and goal-setting.

It has been mentioned already that Spelunky is a Roguelike. This is undeniable in the way that the game procedurally generates its dungeons and emphasises random gameplay elements. What some players may not be aware of, however, is just how much of a Roguelike this game really is.

People who have experience with titles such as Dungeon Crawl, ADOM and NetHack (amongst others) will soon start to recognise more subtle aspects of Rogue gaming: the presence of ideas such as altars and “level feelings” may wow less knowledgeable players, but they’re actually not that original or even viable on their own. 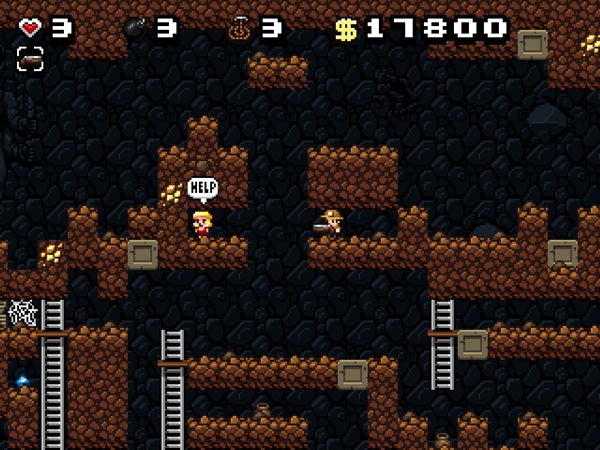 The princess is in THIS cast- er... dungeon.

Spelunky has its own 100-article-strong wiki that outlines the game with incredible detail, and reading through it will bring to attention a whole lot of gameplay innovations that are flat-out stolen from Rogue culture and adapted to work in a side-scrolling environment. Although it sounds cheap, the developer has actually done a brilliant job: where lesser developers would simply try and get “the gist” of Roguelikes and hack out their own tribute, Yu has truly burrowed into the depths of what makes most Roguelikes fun and offers players an expedition which isn’t merely a set of once-off ideas, but rather the culmination of the knowledge and experiences of a whole host of great game developers.

Yu injected his personality by taking it all to the side-on arena – the rest of the game is a well-researched tribute which pays off marvellously.

Spelunky also has a well-designed system that carefully considers the short-, medium- and long-term goals of the average player. The first few attempts at gameplay are meant for pure acclimatisation – the player rapidly discovers a whole host of interesting gameplay elements and works to understand and overcome these initial barriers (usually dying quite a bit in the process) and building confidence in their ability to control the character. 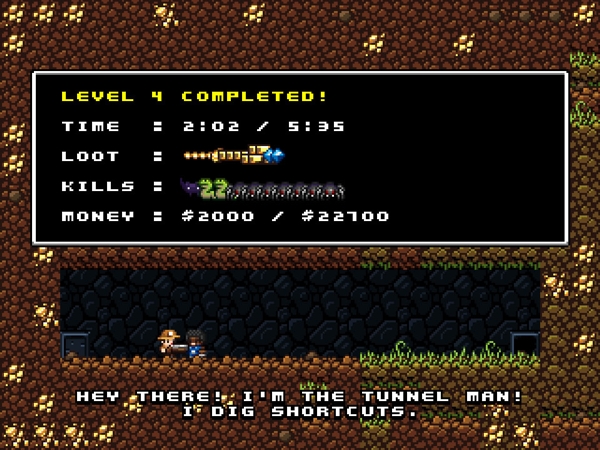 After these first few attempts, players begin to recognise the “set pieces” and are able to more effectively prioritise, diving deeper into the caves more easily and discovering new enemies and challenges as a result. The way that the game is structured (particularly with its lack of save points) means that players will constantly be offered the opportunity to not only refine their reaction to “old” situations, but bang their heads against fresh ones too.

Further down the road, long-term game elements rear their heads. The player is eventually offered a means to immediately “tunnel through” to later levels (after paying a heavy score price over multiple gaming sessions) and abandon the exploration of earlier dungeons in favour of later ones only. Special items and unlockable challenge rooms become the new goals once the game is finally complete, and all sorts of hidden bosses and secret game elements become available to players who are sufficiently determined to uncover all of Spelunky’s secrets. Spelunky is effectively multi-layered: an experience which satisfactorily caters to beginners, veterans, experts and those scary individuals who go beyond.

There’s only one glaring problem with this game (bugs aside – it’s still officially in beta, after all) and that is the difficulty curve. It seems that Yu, in his quest to appeal to a more hardcore crowd, has broken that golden rule of accessibility: Spelunky relies on veteran players and dedicated fans to discover the game’s full potential, rather than offering casual newbies a suitable incentive to plough ahead.

Admittedly, even I only persevered with the game because I was forced to provide a well-balanced and educated review: the first five or so playthroughs were unremarkable, and even Yu’s tutorial succeeded in killing me the first time around.

I feel that in today’s game-saturated market, only Yu’s established reputation and hype base could carry a game like this past its difficult first few plays, and a weakness like this would certainly do no service to a smaller, lesser-known hobbyist developer. I think it would serve the reader well to bear in mind that no matter how amazing a game becomes, one should always strive to sell it to a player within the first five minutes, or risk losing them forever. A lot of pros agree with this, and Yu’s stunt should only be attempted under the correct conditions. 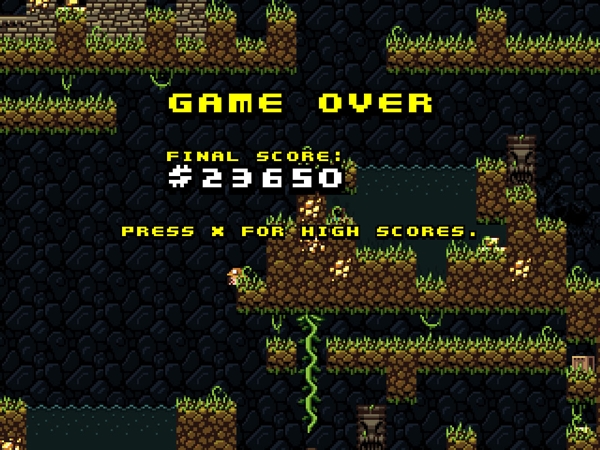 Overall, Spelunky is a great game and I’m glad that I’ve had the opportunity to (extensively) play it and (thoroughly) review it. Although it may at first appear to be unremarkable or too difficult, anybody who perseveres with it is in for one heck of a treat and untold hours of cave-exploring goodness.