This article originally appeared in Dev.Mag Issue 28, released in January 2009.

To accompany our review of the game, Dev.Mag sat down with Daniel Remar, the sole creator of Iji, and harassed him with questions about the development of the remarkable game.

Q. What inspired you to make Iji? A story-driven platformer?

DR. The main inspiration comes from my discontinued old comic, which in turn was inspired by another creation of mine that stemmed from playing Operation Carnage. Iji was at first supposed to be a survival horror kind of platformer, but changed rapidly once I begun working on it. It’s hard to say when or why it turned into what it is now.

Q. Where does the name come from? Why Iji?

DR. All the names were pretty much randomized, and don’t have any special meaning. I wanted the main ones short and easily recognizable though.

Q. Were the any particular goals you wanted the music in the game to achieve?

DR. I mainly wanted heavy or industrial metal music mixed with ambience, recorded live rather than in MOD format. Machinae Supremacy and their various works was a big inspiration, and one of the reason I like them is the optimism and believing in oneself that is often seen in their lyrics and musical style.

Q. Were there any specific guidelines you passed on to the composers who created it for you?

DR. There was a lot of experimenting and testing with the music long before I wrote the general guidelines for the sound and feeling of each song. A mini-soundtrack was produced for the first demo of the game, which gave us experience in understanding each others’ tastes.

While the final soundtrack was being composed and recorded, I let Chris do pretty much what he wanted since I trusted him, and he knew what kind of style we were after. He liked driving, positive tracks rather than dark, depressing ones, and I thought that what he came up with fit the game perfectly. Only one song in the final batch (Organ Smash) was left out of the game. It’s included in the high-quality soundtrack download though, so don’t miss it.

Q. Did you create any custom tools or systems or was it all made in Game Maker?

DR. To make the game’s resources I used Photoshop for graphics, Blender 3D for the characters, and Goldwave for editing the sound and voices, but the only “system” I could say I created was the polygon rotation and forward kinematics animation tool for the final boss. Unlike the other characters it animates in realtime with polygons rather than using rendered sprites, since it’s so large. Unfortunately this made it slow on some computers. 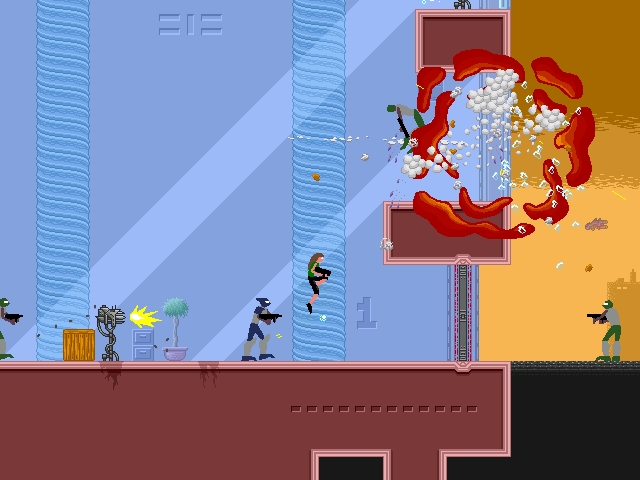 Q. How did you find working with Game Maker? Did you upgrade in the middle of the development?

DR. It’s all GM5, since it was too bothersome to switch to GM6 in 2005 due to the many incompatibilities, the loss of certain functions, the poorer sound and music handling and the loss of compatibility with Windows 98, among other things. I always work in GM5 unless a certain game would be impossible or more difficult to do without it, such as Garden Gnome Carnage’s rotation and surface effects. GGC also started out as a GM5 game though.

Q. It seems you took some inspiration from System Shock, Deus Ex, Blackthorne and Another World. Any other games that helped shape the final game?

DR. The inspiration for the gameplay was largely the games you list, but I got inspiration from so many others (most of them subconsciously) that I can’t list them all. There are references to everything from Tyrian to Doom in there, but I was also inspired by movies like Nausicaä.

Q. You used the same polygonal character animation that Another World used. How did you go about creating and animating the characters?

DR. I built and rigged them in Blender 3D, and animated them frame-by-frame which was so tedious it nearly stopped the development of the game. :p I rendered them from a paralell perspective in flat colors, and fixed the frames up in Photoshop. It produced better results than trying to animate them by hand, at least. Since they are only seen from the sides, I could “cheat” a lot while animating them, such as having body parts cut into each other or dislocating parts to make sure they were drawn in front of others.

Q. It took 4 years to develop. Why did it take so long? Were there several design iterations?

DR. There were no real design iterations, it just flowed from start to finish. It took so long because of the huge amount of content in the game, and the amount of bug fixing I needed to do. Recording the voices and drawing the cutscenes are examples of things that took several months each. Of course, it didn’t take four full years; I often took month-long breaks to keep my motivation up. Building and tiling a level also usually took a few weeks, but Sector 5 was done in three days. Some of the many moves, secrets and alternate texts and events also took a long time since they often caused conflicts, and I had to test them thoroughly.

Q. What are your plans for the future?

DR. There are some games I want to make which will only take a few months each, but I won’t have the kind of spare time I had as when I worked on Iji anymore. I won’t make anything the size of Iji again, it’s too draining.

Q. Of all the games you took inspiration from, which is your favourite?

DR. Of the direct inspirations it’s System Shock 2. I personally don’t think Another World and Blackthorne are fun games, but they’re inspiring. 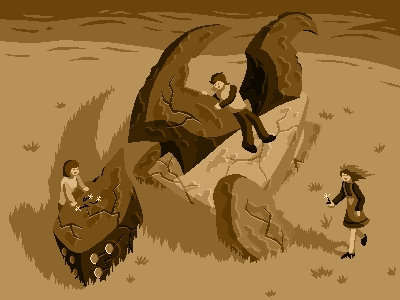 DR. Either the PC or N64, they’re the ones I’ve played the most over the years.