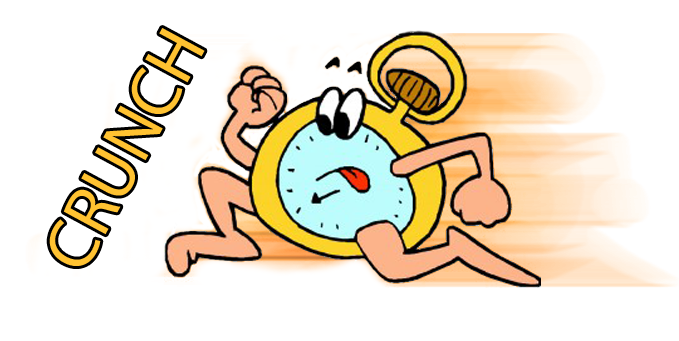 Looking into the development cycle for video games we look at one of the worst, and almost unavoidable occurrences. Crunch. For a common definition of crunch, or in full crunch time, Wikipedia give us A critical period of time during which it is necessary to work hard and fast . Indeed when we are crunch, for anything, we work as hard and as fast as we can.

But unfortunately crunch has a series of negative effect. In a brief summation of Evan Robinson’s article Why Crunch Modes Don’t Work: Six Lessons. Crunch leads to a short-term productivity boost due to the extended hours the people work. But in a long-term scenario crunch leads to a loss in productivity as the there is a natural peak amount of hours that a person can work and be effective at that work. As such it leads to poor work rushed out to meet deadlines. This happens with video games, writing, and many other things.

Given the apparent nature that a long-term crunch is a bad thing why does it occur? In larger development this occurs due to publishers only giving so much money to the studio to complete certain goals. This leads to the management pushing harder on the staff to be more productive without giving them overtime. Which in often enough they do not have the money for, as it was said above they crunch to meet a deadline so they can get money.

With small-medium sized studios, it comes down to budget. The investors a lot a certain budget to a project. And if they can’t make that deadline they have to let staff go or close. So they crunch to make deadlines to survive. Often if the project is not complete a skeleton staff remains to finish the project to something ship-able – or it is handed over to a third-party developer who get paid once the game is released.

With, unfunded, indie studios it is simple. Since you have no one signing a pay check you need to finish the game so you can eat. If it came down to crunching or starving I am sure most people would be crunching.

It’s not always about the money

Unfortunately the financial losses of crunching are not always the greatest worry, you won’t find many developers who make games purely for the money. One of the most famous cases of the effect of crunch was written almost a decade prior to this article. It was a LiveJournal entry by Erin Hoffman, who used the pseudonym ea_spouse. She highlight the emotional, mental, and physical strain that her family took due to the extended period of crunching in game development.

It is easy to understand how when working over double the number of hours a week that most other people to, and only to be told that you won’t receive over-time, days off, or any compensation for that matter would have a terrible effect. On a person’s mental and emotional state. And given the long hours one can easily see that it would put strain on both a person’s body, and their relationships.

Another infamous, but more recent, case of game development crunch was the developers of L.A. Noire, Team Bondi. Reports of 12 hour 7 day a week work weeks being the normal conditions. This was also expanded upon by the fact that developers who refused to comply with these abhorrent conditions were refused a title in the credits.

What is special about games?

Given the above, people who don’t work in the game development industry may wonder why on earth we go through this.

Well, many don’t. The average time developers stay in the industry is 5 years, and taking that further; according to the IGDA quality of life white paper only 3.4% of people working in the industry have beyond 10 years experience.

And those that put up with this?

Game development is of course not unique in this regard; many other industries also deal with the same problem, software development is infamous for projects going overtime and over-budget. As is always the case, those who do it believe the benefits outstrip the negatives. They do it because it is part of the price to pay. If you want to become a doctor, you have to study for many years, and depending on your country, work for the government for a few years after that. If you want to be a game developer, the chances are that you will have to crunch it is a part of the industry unfortunately, and even more unfortunate is how often it is necessary.

So what are the benefits of being a game developer?

The people who work in video games have a passion and love for games. The best parable is: “If you win the lottery you are happy for a year, but if you love the work you do; you are happy for life.” For those who find the right place in the industry I do not believe that they would do not believe that they would do anything else.

But unfortunately many companies propagate the mentality of: “This is game development be grateful you have your job here, and get used to crunching.”

That is a very unfortunate reality, and one that is not true. Work is like life there are periods when things are good, and there are periods where you have to get things moving and give it all you have. The thing that is being opposed is a system of continual overtime without compensation.

But there are places, like Valve, which emphasise an open-work environment, and collaborative work mentality. Perhaps this is an ideal for game development? On the other hand Extra Credits did a piece on EA marketing* in which they covered an old advertisement, which I found transcribed here. I cannot do it justice by paraphrasing, but I will say it talks about issues which I believe are at the heart of video games but are so often forgotten.

What to do about crunch

As a developer there are some things you can do to avoid crunch. The first is understand the ethic of the studio that you work at. If it seems wrong how it works speak to your lead and producer. Producers are in charge of scheduling so if there is a reason for crunching they are definitely the ones to speak to. Some times you with your fellow workers can open negotiations so that you receive the appropriate benefits for the crunch, or have a reduction in the amount of time spent crunching, but keep the reasons for why studios crunch in mind when you do this.

In the end if it seems like the studio is abusive towards its employees then that is not a good place to be at. I would suggest finding somewhere else to work. Since if you believe that game development is the job for your then there is most likely a studio that is the right place for you.

Or you can write an article about crunch which abuses the English language so hard that grammar nazis cry in an attempt to give people an example of why crunch does not work.

*If you want to just watch the segment of video related start at 5:15.