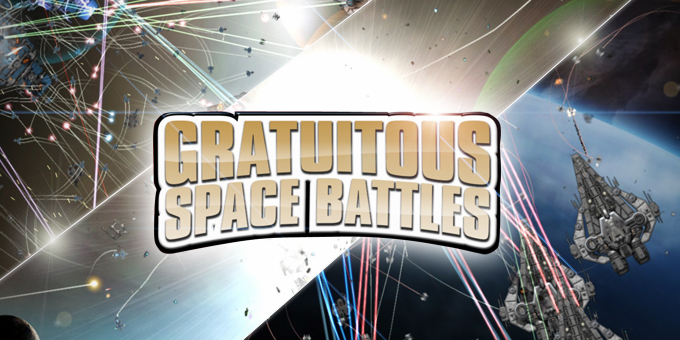 Let’s get something straight right off the bat: GSB is to the RTS what Champsionship Manager is to football games. Just in case you didn’t get the reference, Championship Manager’s that odd football game in which you don’t actually get to play any football. All the player does is move their footballers around team assignments, pick the colour of their shorts and organize the after-parties. The actual game of football is taken care of automatically so the player, when the actual game kicks off, just sits and watches. The difference between this and Gratuitous Space Battles is: instead of injury-faking girly men, it’s really space ships with lasers and missiles and fire and death. I know which of the two I’d rather be watching.

To be clear, this does mean that the majority of your actual interaction with the game is managing your ships’ loadout, plastering shields, armour, power generators, crew compartments and (most importantly) guns all over them.

It’s quite pleasing to zoom in and out of the autonomous battlefield, a thing that gets filled with wreckage and laser beams and missiles and explosions. It’s interesting zooming all the way in to get a better view of your favourite cruiser dishing out a pounding or checking out an enemy ship to see if one of yours managed to blast off its pesky missile launchers. Admittedly, as a novelty it is reasonably short-lived by itself, leaving the game to depend on other strengths to provide a lasting experience, bringing us to its strategic options.

Initially, there’s no doubt that it’s easy to dismiss the strategic component of the game and admittedly it is very easy to overlook. Possibly the most effective tactic, one that remains as effective as ever, is simply to win by sheer force of numbers. While the expected cost- and crew cap is present in each battle to limit this somewhat, there is however motivation to try and secure a victory as efficiently as possible. 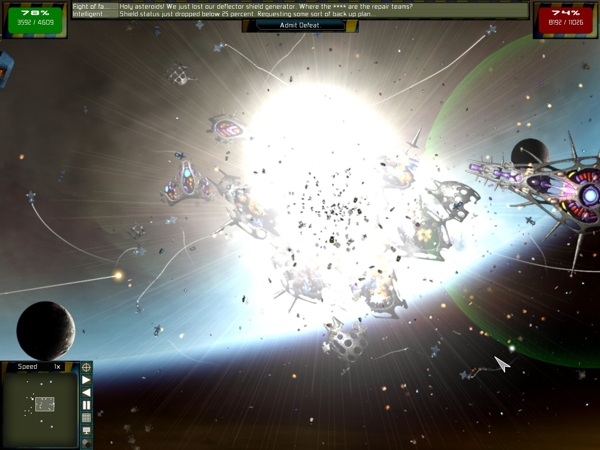 You earn Honour as a resource, spent in order to buy new weapon designs, ship hulls and even additional races, but in order to maximise earned Honour you have to be efficient to the point of being near-impossibly outnumbered. This is where it truly starts getting fun. Attempting to earn the maximum amount of Honour per battle is what makes you pay attention to all the little numbers on all your guns, devices and ship loadouts. It’s what makes you consult the manual to find the difference between shield strength and shield resistance, design ships that specialize in certain roles and formulate formations to maximise the effect of each ship.

You also need to assign orders to each ship before the battle starts, though these are generally more like guidelines for them to follow – things like focus on weak ships first, or prioritise cruisers above frigates. While they seem vague at first, you’ll quickly learn that tweaking them is crucial to success. Strategically, everything you does matter. I’ve changed a consistently losing battle to a resounding victory by literally moving one ship to a different position in formation and tweaking a firing distance order for a cruiser type.

Levels can be replayed using all the technologies and races you’ve unlocked, and it’s as fun as ever to return to a battle to make an attempt at beating the “par” – earning more Honour as you go. The ultimate test of your strategic thinking comes with the game’s own version of an ever popular “Nazi Zombies”-style survival mode as your fleet tries to survive against ever-growing enemy fleets, hopefully resulting in a high score to topple the top spot on the online leaderboards – good luck with that, by the way.

It does however feel that the game is missing a plot or some kind of context to give meaning to each battle. As it is, you simply fight to win each battle and move on. This is a negative point considering there’s quite a lot that could have been done when you read each of the race descriptions and see how they’re all about something. This could easily have been built upon to create a more interesting universe for the hot burning plasma to fly in.

Some players may also feel that the game needs more of an interactive hook for them to remain interested, and that the passive nature of space battles may be a hindrance rather than a reward. But if you fancy playing the role of a Fleet Admiral like Palpatine rather than a Captain like Kirk, this game should provide the experience you want.