Ask any gamer to imagine their favourite games cross-dressing as different genres and you’ll have yourself an entertaining waste of an afternoon. Turn that into a drinking game somehow and you’ll have some of the best ideas that nobody can remember (“Hey! What about Bejewelled as a drinking game! You’d have a grid of colourful shooters…”) and probably the most fun hangover ever. There would probably be rules to where and how you could feel bad and an inexplicable set of text parser puzzles to solve. These things happen.

Ask the Game.Dev forum regulars to do the same thing and you get this ton of stuff to play through. Each one a fragment of a parallel universe where Team 17 were German boardgame designers, Valve had paper instead of the Source engine or Cliffy_B grew up a hikkikomori instead of a disco pirate with a scanner.

Then you have to judge them… Well, I do. You can, but mine’s better. Whatever. Those of you that are boring and want to go straight to the results and play the top 3, click here.

Gears of War: The Minesweeper! – Nandrew 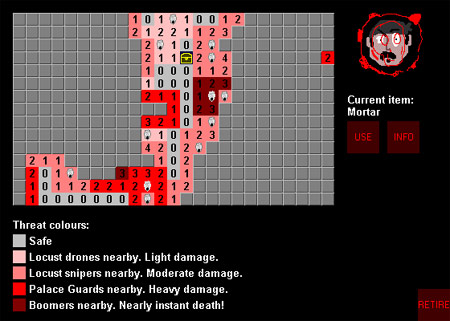 Starting out our trifecta of Gears of War re-imaginings (Hah! I’ve always wanted to use that word) in this competition is perhaps the most abstract of them all: Play Marcus and our lovable Delta Squad heroes as though their entire world was… A Minesweeper game?

To be fair, there aren’t really mines that need to be defused. Instead you have to dispatch Locusts that the game gives you two sets of information about: Each square revealed tells you how many Locusts neighbour it and the colour of a square tells you the most powerful type of Locust nearby. Clicking on a known “mine” square doesn’t end your game, you end the Locust and take damage according to the type of Locust you’ve just curb-stomped. Drones don’t hurt too much, but Boomers and Elite Guards take a concerted jab at the crimson omen that represents your closeness to death. Explore squares that aren’t Locust infested and your health regenerates. So far so good, sounds interesting, right? Oh but you haven’t run into the ITEMS yet.

That’s right, items. Scattered around the map are items that could help you out in your quest to destroy Locusts and maximise your final score (because that’s how wars a really measured!). Some are passive and always active, others need to be used to function and have limited charges. These items aren’t indicated by any numbers or colours, so finding them is sheer luck, but it’s the best kind of fortune when you do. Especially when you’ve just found Cole, whose jubilant whoops scare nearby Locust so much they actively become weaker. The wide range of items is what really makes the game: Everything from finding Colonel Hoffman and his awesome hax [! – Ed], to Betty’s Locust crushing wheels, or even “finding” a torque bow bolt protruding from your armor… This is an amazingly well done evolution of Minesweeper’s play mechanics with Gears of War’s mythos and elements. It’s synergistic, even. The “just one more go” feeling is strong with this one – This time you might even find Maria! 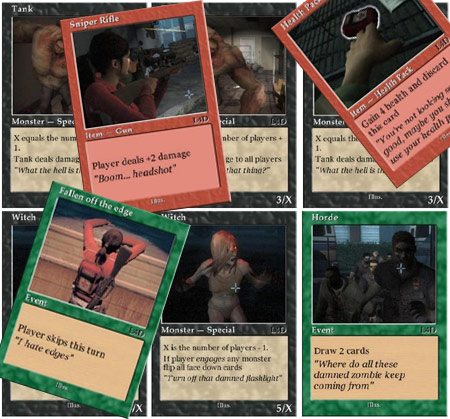 A card game? What? This is the first card game anyone’s entered into these competitions in (counts fingers) 5 years! Awesome. Hang on, double-awesome – it’s a re-imagining of Left 4 Dead, Valve’s frantic zombie-destroying co-op “accidental” teamkill fest. I hope that made you curious, because now you get the game explained to you:

As a card game, Left 4 Dead has you all drawing cards face down from a central pile – each turn it’s one player’s lot to be “the difficulty” and draw anything from 1-3 cards extra, depending on if you want to play easy, normal or expert. (A card game with difficulty settings? Novel!) Once you’ve all drawn, the cards are flipped over at the same time and you find out if you’ve got zombies, special infected or – if you’re really lucky – some kind of weapon or item in front of you. Some cards have on-flip actions: The Horde card makes you draw 2 cards face down when it’s flipped, for instance (these 2 extra cards are only flipped next turn, another nice touch). Zombies deal damage at the end of a turn in which they haven’t been killed (with the exception of Smokers, who damage on-flip)… The players kill zombies by matching a zombie’s hit point total with their gun damage, which can be augmented by special cards like Molotovs or “There’s Ammo Over Here” – which gives everyone +1 damage this round. Picking up different weapons is an important part of the game as each has its own strengths and weaknesses, similar to the way they work in the game itself. Players need to work together to take down the zombie hordes in their way, there’s a great deal of strategising between flips – as well as conservation of med-kits and general panic should a Tank, Witch or (heaven forbid) both appear.

To top it all off, the card game echoes the video game’s Finales by having a finale mode that triggers once you’ve run out of cards to draw, turning an already tricky game into a tense final few rounds that either kills everyone or sees you all emerge as survivors, battle-scarred, weary and raring for another round. 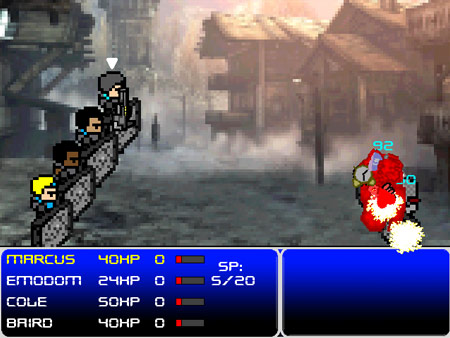 Gears of War + JRPG. There you go, you’ve already imagined the game better than I could lay it out for you in an introductory paragraph, there’s only one problem: You’re not imagining it AWESOME enough.

If the name hasn’t given it away, this is a rather humorous take on the game. You start out with some scene-setting random tongue in cheek dialogue, which works at least as well as those annoying parts where Marcus can’t walk fast because there’s a finger in his ear. Then all the members of Delta Squad – including the perpetually crying “Emodom” – inexplicably climb on top of Marcus and disappear… If that didn’t make you immediately go “ZOMG JRPG-feel!” then you’re really not doing this right. Marcus/Delta runs around, collecting COG tags and generally trying to grunt the Serran national anthem right up until you get too close to a locust, then you’re trust into the combat screen. Yay, combat screen! (Again, if you’re not gleeful at this, why do you even pretend to care about JRPGs?)

Combat proceeds in well-worn turn-taking fashion until either everyone in Delta or all the enemies are dead. Popping out from cover to fire at an enemy exposes you to damage and you only regen while in cover, making managing your squad quite simple, yet interesting. Especially when you pick up weapons: Equipping a sniper rifle or torque bow really does make a difference (and I personally love the way the torque bow works, taking a whole turn to crank up before it fires) and you can level up different stats to make you more accurate as a sniper, less prone to dying, do more damage, etc. Standard stuff so far. Standard until you get to active reloads.

Yes, Gears of War’s seminal addition to the TPS milieu is represented wonderfully in Super Gear of War XDAA3: Every time a character has to reload their weapon, you’re given the active reload minigame. A perfect reload gives you SP and a slight damage boost, a fluff costs you SP and probably makes Dom cry more. SP can be spent during combat for neat attacks, things like chainsawing one of the enemy, lobbing a grenade, calling down mortar fire or targeting the hammer of dawn. It’s also a relatively long game, but please do note that as soon as you give it a try you’ll finish wanting more of it. I’d kill to see the whole Gears saga redone this way. I really would.

“Fun” springs to mind. “Strangely compelling”, “A puzzle game?” and “Filled with TF2 in jokes” would also probably be on the tip of your tongue. You’re tasked with guiding a lone Blu pyro around multiple levels (all themed after the TF2 “Meet the …” videos, nice touch), each with a Payload-style bomb-on-a-track that you have to push toward the level exit. Death respawns you, but doesn’t erase your progress so far, turning the game into a race against the ticking “level timer” and forcing you to take more risks, very clever. As you progress through the levels, the game introduces new characters, each of which kills you in a different way: Snipers jiggle left and right, firing arrows randomly; Scouts never bloody stop bleeding moving so they’re hard to dodge; Heavies hog medics and spin around firing randomly, etc. They’re all very true to the way the classes behave in TF2 itself, turning the game into an abstract take on the life of a pyro, on Goldrush – which is exactly what the game is called! OMW, utter hax [!! – Ed]!

I’d go further and imply that Dammit must be totally haxxoring [!!! — Ed] due to this being her first foray into Game Maker and her first friggin’ game EVER, but that would be unkind. The long and the short of it is that guiding your little pyro around, trying to not get killed, pushing your cart feels absolutely great. All we need are more levels to play through (with some different characters working together, for example) and some liberally applied polish.

Besides arriving via courier in an honest-to-goodness handmade box, the effort that’s gone into Wormies The Boardgame is obvious from the word go. Slotting the enormous map together is done in a bemused haze as one of you reads the rules aloud in a silly voice (like you do). Setting up your wormy figures on the top-down map grid and handling all the other little doohickeys is rad. Or tubular. Or whatever the cool words were when Worms first came out. Once you’re done setting up, the game pretty much plays like Worms. If you’d imagined Worms 3D, without all the suck and as a 2D topdown game. If you know the franchise you’ll be cackling as you murder worms (usually in brine, heh) and pick up crates around the map.

Eventually though, you realise that the game is a bit lacking in terms of that final punch. It’s worms, but it’s too close to worms and expects you to know the source game really well: What happens when a worm is poisoned? I have no idea, the boardgame’s rules don’t say. The slider-bar weapon counter card is neat, but it feels like a feature for feature’s sake and not good game design: Weapons would be much better served as a hand of cards, each with their own rules on them, thus doing away with a whole extra printed page to constantly refer back to. It feels like the question of “What IF Worms was a boardgame?” has only been started to be explored, there’s more to be asked and more gameplay to be found here, I really hope DarthPenguin and Insomniac find it. They certainly found a gem with the random placement card system – not to mention the sheer brilliant elegance of the random movement rules! If only the whole game felt as slick as that.

This came down to a battle of completeness: All three top entries took turns being first in my mind, but in the end the games that felt the most like a complete experience won out.

These results and mini-reviews are a subset of the full results for the bi-monthly Game.Dev competitions. Reviews for all entries can be seen at the official results thread