This article originally appeared in Dev.Mag Issue 29, released in February 2009

If one had to compile a list of the top ten reasons for envying former Dev.Mag editor-in-chief Rodain “Nandrew” Joubert, coming a close second to his fabulous hair would be his tendency to constantly roll out absolutely fantastic and innovative games. Whodunnit…Think Quickly is no exception to this rule.

Whodunnit places the player in the tweed jacket of a private eye, having dinner along with a number (varying depending on the difficulty selected) of other guests at a mansion, when suddenly the host falls face first onto his plate! The brilliant detective deduces that he is dead (the living tend to breathe more) and now he has to deduce who the killer is before another succumbs to the poison now coursing through everyone’s veins. 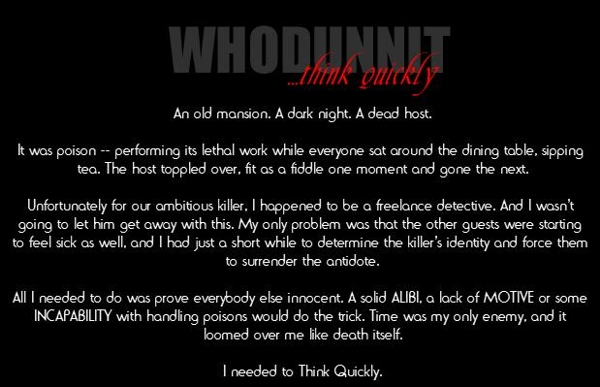 The fact that one of your character’s abilities is taking a smoke break tells you straight away that this is a tense experience. The player needs to learn how to ask the right questions to the right people, and how to keep track of all the information handed to them. Being a totally cerebral experience, the game is played solely with the mouse, with a simple (if not slightly bland) interface displaying all you need to know.

As much of a fun puzzler as this is, that’s not where the true appeal lies. The charm is the atmosphere, as odd as that sounds for a game which is essentially just a collection of buttons and a timer. Nandrew has put a few touches to the game that heighten the experience. Panic and pressure mount up as the timer ticks down, as the player wrongly accuses a guest, as their prime suspect drops dead. It’s a wonderful testament to how much atmosphere can be created with limited resources and is a great way to pass the time; the 10-minute limit (a literal take on the theme of the Game.Dev competition it was entered into) makes it especially suited to coffee breaks or as a quick distraction from work.