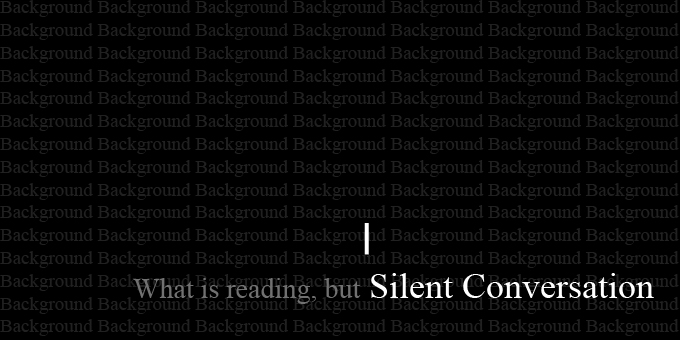 It would seem that I’ve somewhat made a name for myself around her for being the wordy, story dude – because every time something pops up involving stories, epic narrative tales and, well, words in general, it gets passed on to me. Luckily, I really do enjoy these kinds of things, and that’s why I got a kick out of Silent Conversation.

For title explanation, the game delivers you a quote from Walter Savage Landor (if that’s not an epic “I write stuff for a living” name, then I don’t know what is):

“What is reading, but silent conversation”

Alright, abstract devices aside, Silent Conversation, as you may have guessed, is a game – and a remarkable one at that. Basically, all you have to do is move your ‘character’, which takes the form of a ‘|’cursor (anyone who’s typed before will know what that is), using the arrow keys, touching each word as you go. Sounds simple, right? Well, it kinda is. What makes this unique, however, is that it’s not just any text you’re traipsing over; rather it’s text from some pretty well-known (and not so well-known) stories, poems and haikus.

Still not grabbing you? Okay, let’s take it up a notch.

Not only does the text tell a story, it also forms the set in which the story takes place. For instance, many times during H.P. Lovecraft’s short story, The Nameless City, your character enters into caverns and caves; as you move your cursor along to these parts, the text of the story you’re reading crouches in on you forming the cave, mimicking the story as it is being told. It’s a brilliant way of presenting the stories as if they’re more than just the words being read to you. Anyone familiar with Lost Odyssey’s method of presenting text in stories to you (where words like ‘wind’ fly in like wind, etc) will know what to expect. It really is a great take on story telling.

Of course it’s not all just a reading exercise; there is a fair amount of challenge present. Apart from the challenge of hitting every single word to achieve an A+ ranking (even the ones in insanely difficult places to reach – I always knew the day would come when punctuation could save your life), there are also ‘power words’ which pulsate in red, sending copies of themselves floating towards your cursor. If you touch these images, all the words you’ve touched in the last sentence or so go grey and you have to go back and touch them again (not to mention you forfeit the A+ rank). To avoid this, simply touch the power words themselves, while avoiding their flying images. 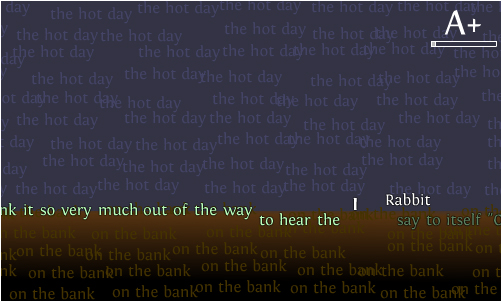 The game isn’t without fault – mainly the game as a whole isn’t everyone’s cup of tea, and once again, it borders on that inane game/art line. The controls and gameplay aren’t all that complex and diverse, but then, the game doesn’t really call for it. The short stories are, ironically, quite long, taking well over 15 minutes to complete; but if you enjoy reading, while experiencing the stories in a new way, then you really won’t mind. At times, though, the story is quite difficult to follow as sentences begin and end in weird places, but that’s a minor thing that you’ll get used to.

At times, the words, the soft piano music in background, and the visual effects created by the story itself, takes you somewhere far away in your own head; and more than once I forgot I was actually playing a game.

Nine levels (ten including the tutorial) with speed completion and race modes make this a fun and unique little trip into the world of stories – and what it sets out to do, it does it very well. It hardly needs to be said, but if you hate reading, you’ll probably not enjoy this all that much – but give it a try, you might find out there’s more to words than you think.