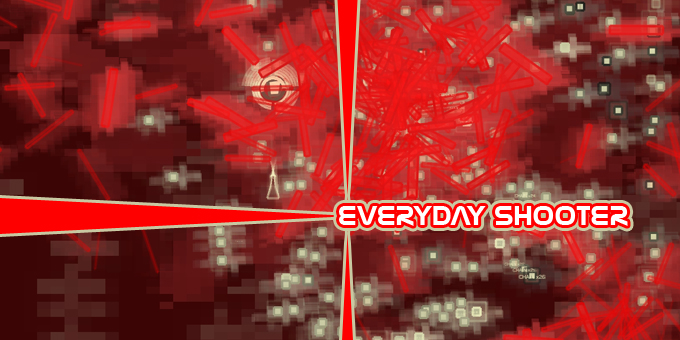 Semi-procedurally generated music, beautiful visuals, and 8 levels of bullet-hell-like mayhem; this is Everyday Shooter, and it’s not ordinary. 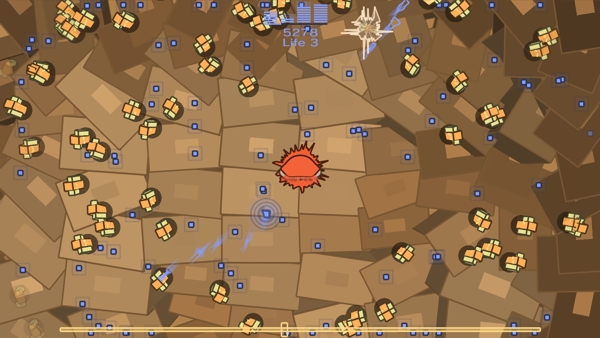 This isn't as overwhelming as it looks

At first glance, Everyday Shooter appears to be exactly what it says on the box. Sure, the procedurally generated guitar harmony (governed by your own actions) layered over a guitar-only backtrack does something to differentiate it from many games, given that few attempt to do anything dynamic with their music and that these fancy musical tricks are evident right from the start. But that’s not enough to make it seem as if it’s anything more than a Geometry Wars clone.

But fear not; that feeling will persist only until you’ve played through 2 or 3 levels and seen the game reinvent itself that many times. Each level in the game presents the player with subtly different combo rules, new dynamic background graphics, a new song, and new enemies – in fact, it’s quite easy to see the game as an ‘album’ of sorts, given its presentation; an opera of beautiful graphics and score maximisation. And if this is the case, then it’s an 8-track guitar-driven album where each track is better than the one before.

The best song in the game appropriately accompanies its best level: the one with tanks and giant cannons in it

The game also features some meta elements: your score for every playthrough translates directly into a currency that you can use to unlock new things (cosmetic or otherwise) to mix up the game. The most valuable of these being the ability to increase the number of lives with which you’ll begin the game – you’ll need them – and single play mode, for practising those tricky levels. This system makes your individual efforts worth just that little bit more, even if you fail at the end.

However, as every humble developer will admit, nothing is perfect, and Everyday Shooter is no exception. Some would quickly cite its steep difficulty curve as a significant barrier to the accessibility of the game, but the true issue in my eyes isn’t that the game is difficult, since it wouldn’t make sense for it to be anything else. The difficulty problem is exacerbated by the manner in which the game forces you to play all preceding levels before unlocking the next one. While purchasable unlocks such as shuffle mode and single play can somewhat alleviate the frustration of having to replay all the levels in order, it doesn’t change the fact that you still have to successfully pass levels 1 through 4 in a single game before unlocking level 5 for either mode. Because of this, I fear that many will be put off by the game unfairly, before even bearing witness to some of the game’s creativity.

Let it be known that I am not afraid of petty difficulty.

Yeah, so I’m late to the party. Why did I review a game that’s almost 2 years old anyway? Because I can; also because, as I’m ashamed to admit, I only played it recently; mostly, however, it’s because Everyday Shooter is everything you don’t expect it to be, and the irony of its humble name is clear to anyone who tries it: Everyday Shooter is not ordinary. So think of this late review as testament to the fact that the game is good enough that its age doesn’t hurt it in any way.