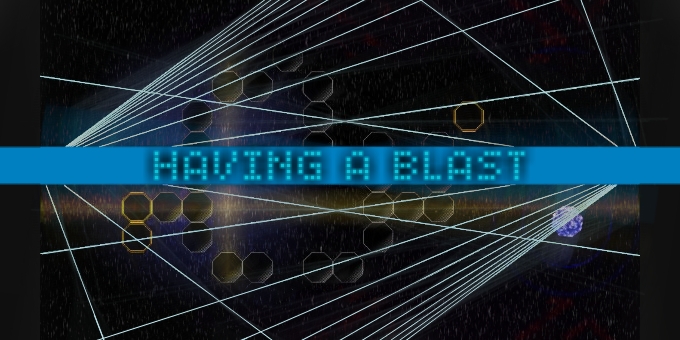 Ed: Yo Nandrew, where’s that ShellBlast review you promised me? You’re already a day late.

Me: Ah, er, bad news. I haven’t written it yet. I’ve been banging my head against this level 30 nuke defusal for most of the afternoon, and as far as I know I’ve still got oxidation and time-bombs to unlock.

Ed: What? Put the damn game down and get on with your writeup already!

Me: I’ll start it as soon as possible, I promise. I just wanna clear these next few levels first …

Me: (throws a chaff grenade at Ed, defuses him, saves the day and progresses to the next level)

The short version: ShellBlast is a bomb defusal game which actually makes you feel like you’re defusing bombs. This is awesome.

The long version is pretty much the same — just with more words, details and dev analysis. I’m going to say this up front: get your hands on ShellBlast right now. It’s only US$4.95 and will rock your socks off. If you want to hear some good reasons for getting it instead of trusting me on blind faith, read on below.

ShellBlast is a puzzle game that’s best described as grabbing the raw appeal of classics such as Sudoku and Minesweeper, slapping on a timer, giving you a lot of angry colours and badass rock music to go with it and explaining to you in no uncertain terms that if you don’t solve the puzzle properly, everything will blow up. It’s one of those rare games which offers the player a perfect balance of intriguing gameplay, quick thinking and a stunning atmosphere. 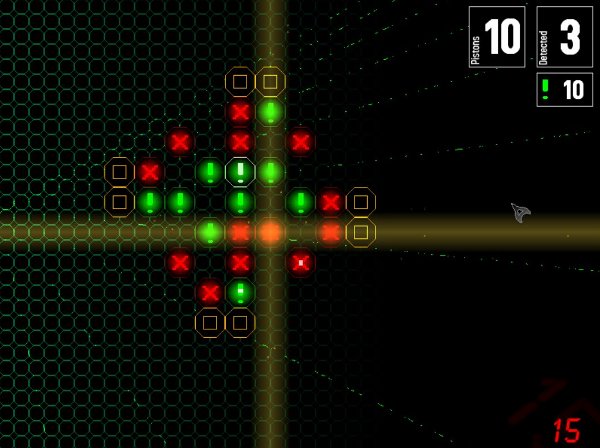 The aim of any bomb defusal situation is to hunt down and correctly mark a bunch of “pistons” in the bomb before the timer runs out. Your primary tool in deducing their location is a crosshair that detects the number of pistons in a given row or column, allowing the player to logically deduce where each piston is by using several readouts from various positions on the playing field and marking each grid block with either a (!) for pistons or (x) for known duds.

This in itself is a pretty cool concept, but the true charm of the game is the variety of situations it throws you into. Tools such as chaff grenades (used to reveal individual piston tiles) and different bomb types (including one which forbids you from making marks on the board at all) constantly put you to the test: just when you think you’ve mastered the game, it throws a new and delightful challenge your way, punctuated by the occasional “boss stage” nuclear bomb which often takes up half the screen and requires every precious second to solve properly.

Because I like to waffle about dev stuff, I’m going to leave behind the basic game description now and use the next section to rattle off what I think causes this game to really hit the nail on the head.

Thematically, the game is pretty watertight. Your mission selection screen is an eerie blue map with bunches of random classified-looking text sneaking across the screen, and that’s just the sedate part. Once you get into the missions themselves, you’ll be confronted with an experience that combines game rules, graphics and audio to direct them all in one universal direction: making the player feel tense. 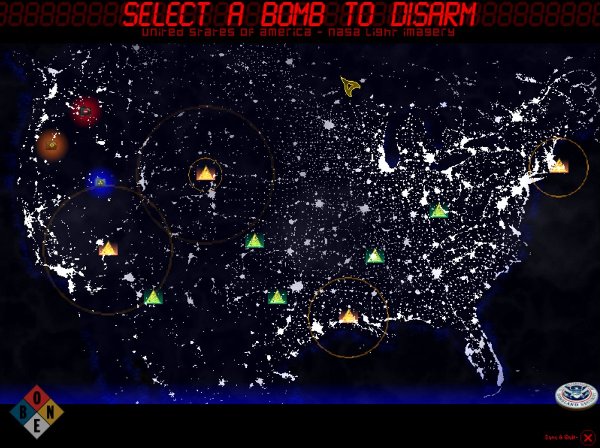 Mismark a biological bomb, and an imposing countdown ticker will drum away your remaining time. Take too long on any level and the screen will shake, your HUD will go haywire and the sweat will form on your brow. Warning klaxons go off to the accompaniment of high-tempo background music which is, of course, written with one express message in mind: “Dude, you’re totally shoulder-deep in doggie doo.”

Everything in the game has an emotional purpose, and it’s truly a testament to the skill of the developers when the player not only has to concentrate on solving the puzzle, but actively has to fight off panic when the bomb counter ticks through its last thirty seconds.

Most developers think that by simply adding content (also known as the “bells and whistles” approach) they can make their game better. “Hey, it’ll increase the chances of players liking something, right?” they seem to say. Well, this is the wrong approach. A feature-additive game can often become disjointed, or force players through wasteful and not-so-fun experiences because the game wasn’t fussy enough about the padding it received.

ShellBlast thankfully doesn’t fall into this trap. In fact, it spots the trap, fires a 100 megaton warhead at it and blows it to smithereens. Every new variety of bomb and every new stage is basically just a variation of its core rules. The simplest of tweaks are applied, such as reducing the timer, increasing the play field, hiding the total number of pistons or forbidding certain markings on the board. These small changes affect the game radically without feeling contrived or unnecessary.

It’s the mark of a good designer when a few core rules can be taken, permuted and altered enough to provide such a wide variety of gameplay experiences.

A general rule of thumb is that the quality of a game (at least in the eyes of a new player) will always be judged first by the quality of its tutorial. It’s remarkable how many devs make the mistake of implementing a poor tutorial: they either tend towards a bloated and slow set of explanations which bore the player, or lazily skip out on getting the player grounded because it’s presumably too much bother.

ShellBlast hits a happy medium and uses all the tricks of the trade to get players comfortable. Tutorials are scattered throughout the game in manageable doses: when a new type of bomb emerges, players are given a description of its rules and a live demonstration of how to solve them before being asked to solve a relatively simple example.

It also explains more advanced bomb solving concepts in separate, non-compulsory tutorials that sit patiently on your mission select screen until you feel that you need them. These combine with bunches of quick tips and tricks that are shown quietly at the beginning of each level to help players get into the action while still reinforcing key concepts.

A good game explanation should hold your hand while you get used to the fundamentals, while at the same time slacking its grip enough to let you go off and do your own thing when you feel ready. This pretty much sums up what ShellBlast does for you.

For the people who don’t care about the dev crap

In summary, ShellBlast is a very nicely polished game which is a whole lot of fun. At this point, I would usually just say, “Buy this if you like puzzle games,” but the fact is that this will appeal to anyone who gets a thrill out of disarming the last three columns of a nuke a whole three seconds left on the timer, then chewing off their nails and most of their fingers to see if their last-moment changes will offer glory or complete annihilation.\ 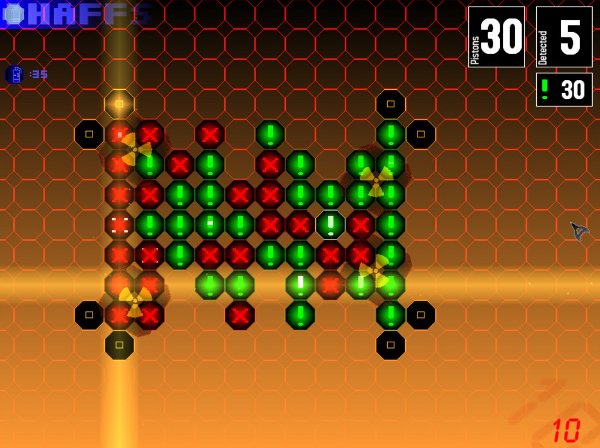 I’ve not experienced a game this intense since Uplink, and if you know anything about Uplink’s reputation, that says a lot. I can only say that I’m really looking forward to seeing ShellBlast HD popping onto Xbox Live Indie Games, and I hope that it manages to top the high standard that’s already been set by Vertigo Games.

So yeah. It’s five dollars. It’s really fun. So get it and play it.

The editor of this magazine would like to stress that the opening dialogue of this review was a dramatisation and in no way are reviewers placed in any danger during the production of our content. In their magnanimity, the editorial staff would also like to proffer the following career advice for budding journalists who may have decided that today is a good day to read the fancy italics text at the bottom of articles: throwing grenades at your editor is not a good career move.