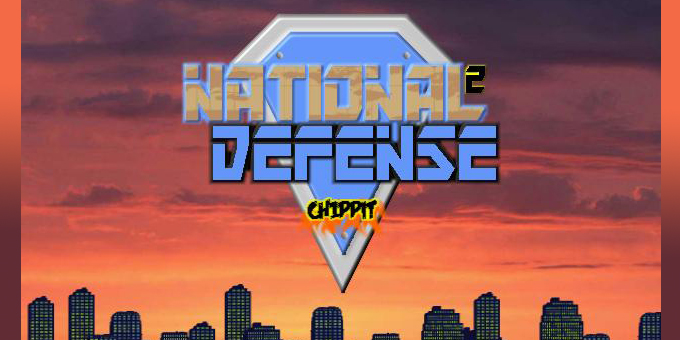 When he’s not busy correcting the spelling of teenagers on the Internet or cracking the whip over his lackeys, Dev Mag’s very own editor Claudio “Chippit” de Sa has been known to delve in a bit of game development himself. National Defense is one of his creations, and it’s a great example to show what a bit of planning and foresight can do to give indie games an extra sprinkling of class.

Picture lasagna; the pasta and mince are fairly ordinary when taken separately, but put them together and slap some cheese on top and you get a whole new, much more appealing meal. Apart from making this reviewer hungry, the image also aptly describes the way National Defense 2 is presented. In the meaty center of the dish (the gameplay, for those who think the analogy is being pushed too far), the player controls up to three turrets that are trying to gun down as many attacking planes as possible before the city is destroyed. The turrets themselves can be upgraded, or swapped with shields, or, if enough of the player’s meager resources have been spent on upgrades in the various fields, a laser that downs each and every one of the foes on the screen with one shot. There are a lot of options to choose from, and a limited window to experiment in, and at first the player may seem a bit swamped; luckily they will have lots of chances to try everything out as they get blasted to hell and back and get dumped back to the load-out screen.

Death and failure will be a common occurrence, and while this may seem frustrating, the difficulty is actually a smart choice which forces the player to adopt trial-and-error style tactics. If the game was easy enough to rush through without experimenting with the standard set-up, a lot of the different play styles and upgrades would be ignored. It’s possible that a better balance could be found somewhere between challenging and frustrating, but as it stands it shows that some thought went into how the player would need to play.

Similarly, little ideas here and there are the breadcrumbs on the meal. The inclusion of a setting that increases the size of explosions, however superfluous it may sound, puts a bit of an extra kick into the action. Of course, there are those who would say that the large effects clutter up the screen, and for that reason the decision to give the user choice is a superb idea. It makes it feel more like a full product than a rough experiment, an aim that a lot of new developers should keep in mind when thinking about how to get their own games into the limelight.

One of the very few criticisms that could be leveled at the game is that it doesn’t have much of what one could call a spirit. As a purely technical achievement, it’s a solid piece of coding, but it isn’t going to be doing much in the way of lending itself to the cause of the ‘Games as Art’ supporters. It lacks a certain charm, something that could have been alleviated with a few jokes, a tongue in cheek attitude, some interesting enemies [there is a UFO in there somewhere. Does that count? 😛 – Ed] or weapons. It’s not a major flaw, but one that is pretty easily fixed. Apart from that, Chippit has a great base here to build on in future possible sequels.