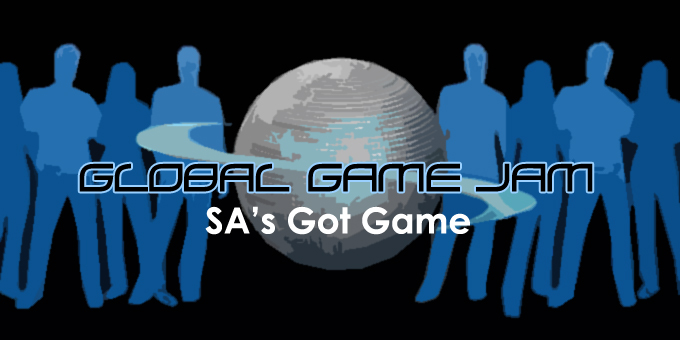 Teams all over the world were given 48 hours to make a game using a handful of keywords and whatever tools they could get their hands on. Local developers Danny “dislekcia” Day, Marc “Aequitas” Luck and Rodain “Nandrew” Joubert banded together and managed to get together a little offering which they called the 48 Hour War. It was built as a satirical jab at the madness and futility of modern warfare.

Here’s their account of how those two days went and what they learned from making this game.

I’ve had a fair amount of experience with rapid game prototyping in the past. In fact, about ninety percent of all the hackneyed attempts that I’ve ever delivered are the result of no more than 24 hours of furious designing, coding and energy drink consumption.

What’s considerably trickier, however, is working in a high-pressure environment with two other developers on a project guided by a handful of keywords and a looming 48 hour deadline. It’s one thing to think up something by yourself and throw it onto a computer screen, but it’s a whole other kettle of digital fish when you’re trying to organise and assemble a project from scratch – conflicting ideas and different development approaches can be the bane of any team’s work scheme unless you have developers who are quick to pick up problems and work towards middle ground. Fortunately, we seemed to do this rather well – even if there were a few initial hiccups involving chinese food, misunderstood prototypes and me spontaneously falling asleep on the couch after a harrowing session of Castle Crashers.

My advice to anybody in this sort of situation: take some time out first to brainstorm. Get a bunch of random ideas going and be prepared to throw a few away – including some of the awesome-sounding ones. We had a glorious concept for a game that simulated three developers trapped inside a house, working on a project and doing their best not to flip out and murder each other (particularly fun as it would be poking fun at our own trials and tribulations) but we eventually decided against it in favour of a clearer and more practical plan – good old entrenched warfare between two rival states.

The next major step which I felt to be of utmost importance (in the interest of clarity, cohesion and national security) was writing stuff down. It’s amazing how much more or less intimidating an idea can becomes when it’s on paper and you can – at a glance – have a look at the relationship between all of your basic game elements and figure out what needs to be done first. A good design doc should be a necessity for any game project you make, and it becomes even more important when working with team mates who don’t have your exact vision for the game wedged into their skulls. 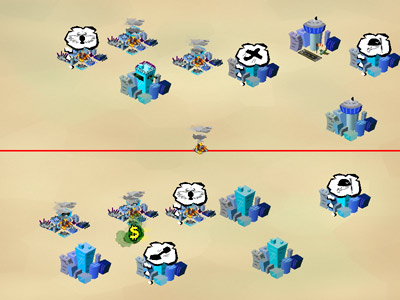 Although I did assist with programming the final product (and about several thousand rejected prototypes before that), my pride and joy on this project was my ability to shuffle off into a corner somewhere and tinker with sound effects. I commonly evangelise the good use of sound in games – not only does it add to the atmosphere wonderfully, but it’s something that’s actually really easy to home-brew and the sound creation process can be incredibly rewarding if you just let yourself have fun with it.

Since we were working on a satirical project, my sounds could be as funky and over-the-top as I wanted – mortar fire and explodey noises emanated from my mouth in a grossly onomatopoeic fashion. No professional equipment, no fancy devices, just an open-source sound editor and whatever my imagination had handy. I even lured dislekcia in to deliver an impressively screamy, 10-second-long warcry straight into the beleaguered microphone. He ended up fainting from the exertion, but we got a really rad sound clip out of it.

Because we didn’t really have a sophisticated version control system to help the three of us merge our work streams (the best thing we had was a function in Game Maker to import certain resources one-way), we improvised and ended up with a system that actually worked rather well. Dislekcia found out that he could add graphics and animated art assets to the game by importing his graphics along with a “controller object” which would deal with animation and other fine details. In this way, the only thing that our lead programmer (the ever-so-hax-filled Aequitas) had to do was correctly attach the control object to the necessary actors in our game, and the graphics would magically appear on the screen carrying out the instructions that Danny had written for the controller object back on his PC.

I’d been looking forward to participating in the South African leg of the Global Game Jam, so when events conspired to prevent us traveling the 1700km down to Cape Town so we could join the other teams at UCT for the weekend, we decided that we’d simply join in from where we happened to be at the time…

In order to get a bit of a break from my “day job” and force myself to learn, I laid claim to doing the art for whatever game we ended up making over the weekend. I’m a designer and coder by nature, usually my projects suffer horribly from programmer-art-syndrome because I’m too busy writing interesting algs to bother making things look good. Plus on paid game projects I have the budget to bring in external art skills to make with the pretty.

After a bit of a headscratch at the GGJ theme and SA’s given words, we started brainstorming ideas. The first thing we all agreed on was that food would fuel better ideas, so off to the local Chinese takeaway we went, pitching concepts at each other along the way. Among the games we toyed with making were: A game in which you had to manage 3 developers stuck in a house on a tight deadline, preventing them from killing each other; A political simulation of some description; And a simplified take on entrenched conflicts where neither side is wholly innocent, nor can you really tell who to support as an outsider. (No points offered for figuring out which one we chose, nor which general geographic area we were thinking about).

Instead of diving into code and gameplay structures once we’d decided which game to work on, I had mild panic attacks trying to come up with an art style that wouldn’t end up looking like utter crap… I plugged in a tablet I had lying around, I drew all over hapless pieces of paper, I googled for images I could purloin, I even contemplated taking pictures and editing them… Eventually I settled on “drawing” shapes with a polygonal lasso and filling them in with solid colours. Provided I did this zoomed in enough to aim for a pixel-art feel and layered my outline shapes intelligently, it seemed to look ok.

Showing my newly decided art direction to Aeq and Nandrew meant they showed me their progress on the game mechanics… This led to another design session, this time around we managed to agree on how to cut our artsy protest game down to gameplay achievable in 2 days and I went off with a list of sprites to provide. Except I had a problem: I really didn’t think I’d be able to draw frames of animation for these things, so I did what I always do in situations like this – Cheat.

Instead of animating frame by frame, I pulled sprites into Game Maker and built animations programmatically using rotations, movement and liberally spawned “effect objects” that faded to invisibility over time. Game Maker really worked out for us here: When I was done with an animation, I’d produce a GMK file that Aeq and Nandrew would merge into their game and simply spawn any new graphic objects over their placeholder art. The merge process meant that, as long as they specified object names as strings in their scripts, I could edit and tweak animations between merges and they’d show up exactly as I intended on their side with no re-implementation on their part. Code and graphics were pretty much separate.

Nandrew did the same with the sounds – handing Aequitas a new set of resources every 15 minutes – and we ended up pulling together a functional game on top of a very quick and dirty prototype very quickly. I’m quite happy with what we managed, especially given my normal artistically-challenged state. The only thing I’d change is give the game a better tutorial and explanation of why you’re doing what you’re doing. Although the long-distance suicide bomber is the most amusing thing ever!