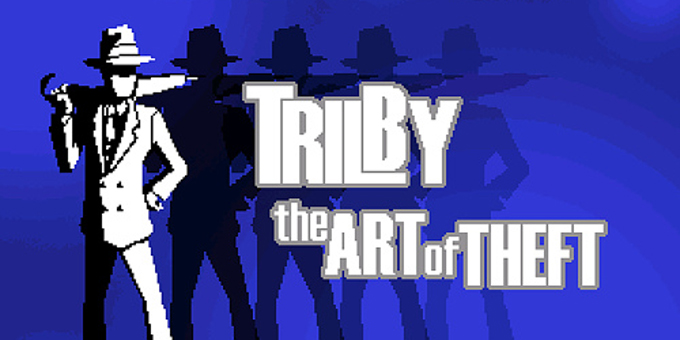 This article originally appeared in Dev.Mag Issue 22, released in June 2008.

Trilby: Art of Theft is a stealth-platform game created by Ben “Yahtzee” Croshaw using Adventure Game Studio. Yes, you read correctly – a platformer made in an engine designed for adventure games. As the title not-so-subtly suggests, Art of Theft stars Chzo Mythos protagonist Trilby. So what’s he up to this time? Puzzling his way through haunted houses? Uncovering the secrets of reality-shifting hotels? Well, no. In this game he’s doing exactly what got him his reputation to start with – cat burgling.

Art of Theft is comprised of a linear set of missions (or “heists”, as they’re called), which are linked together via a simple but entertaining storyline. Each heist follows more or less the same pattern. Trilby will first brief you, giving you some back story to the mission as well as outlining the victory conditions. Then it’s then up to you to guide him through the level, snapping up whatever swag you can find while ensuring that you don’t get spotted by guards, security cameras, laser tripwires or civilians. Should you be detected, the alarm will be raised. This doesn’t cause immediate failure, but set the alarm off once too often and Trilby will decide to hotfoot it out of there before the cops show up. Complete the mission, and you’re presented with a score screen that outlines your performance and assigns you a rating for the heist, ranging from a pathetic “C” to the elusive “Trilby” rating.

As you’ve probably gathered from the above description, the main component of Art of Theft is stealth. This is achieved mainly by the best friend of every burglar since burglary was invented – darkness. By sticking to dark or dimly-lit areas, Trilby is able to hide himself from view and avoid setting off the dreaded alarm. Different light levels offer him different degrees of invisibility. Completely dark areas allow him to move freely without being seen by anything but laser sensors. In dimly lit areas he is visible while in the open, but can hide by hugging himself to the wall behind him, an action that costs him the ability to move (this is also useful for dodging the aforementioned lasers). Slipping in and out of visibility without being detected requires careful timing of your movements and actions, but is made easier by the predictable patterns that guards, lasers and cameras follow. Bad timing can be fatal, though, since cameras and lasers will trigger the alarm almost immediately. With human guards, however, Trilby has a last-resort tool – a limited-use tazer built into his “grolly” (a grappling-hook/umbrella hybrid) that he can use to render them unconscious before they hit the panic button.

While dodging Security is the core mechanic of the game, Yahtzee has made an effort to spice the actual theft portion up a little by throwing some extra challenges into the mix. While lootable items are generally placed within relatively easy reach, more valuable items and mission objectives are often secured inside safes or locked rooms, which you must break into by means of simple reflex-based minigames. Written notes are often scattered across the levels, containing security codes or clues to unlocking hidden loot. There are also electrical panels in some levels that, when successfully tinkered with via a chance-based “cut the wire” minigame, will do anything from shutting down security systems to bathing the entire level in darkness. Not that any of this is superfluous either – for each puzzle you solve and for each bit of loot you steal, you earn Reputation Points. These can be spent between missions on new abilities (such as “sidle”, which allows you to move while wall-hugging), upgrades to existing abilities (such as improved lockpicking skills), or even such luxuries as “guard amnesia”, which will gradually replenish your alarm count as the level progresses. 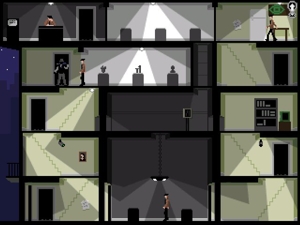 At this point, it would be pertinent to mention the influence of Reputation Points on Art of Theft’s replay value. You are able to replay any of your completed heists at any point, but any abilities you have purchased in later missions will remain available to you during those replays. Even the earliest heists are designed especially with this in mind, with some areas made inaccessible until you purchase the necessary skills to reach them. In addition, the end-mission rating boost that these new areas provide comes with more tangible rewards than simple bragging rights. A progressively higher average heist rating will unlock special costumes that Trilby can change into, granting him special abilities to aid him in his work. All of this works together to make Art of Theft a fantastically rewarding game to play through multiple times.

I’m going to say it bluntly – Art of Theft is not an easy game. In itself this isn’t a bad thing, but the difficulty is augmented somewhat by a few unfortunate quirks. Firstly, the controls tend to alternate between “over-sensitive” and “dead”, which works against the whole split-second-timing part of the game. Nothing is more frustrating than whacking the wall-hug key to dodge incoming lasers, only to have Trilby blissfully ignore your command and set off three alarms in a row, or wall-hug and then suddenly pop out again because you held the key down for one nanosecond too long. Secondly, the enemies may follow a predictable pattern, but they have a tendency to go “out of phase”. In these cases, at least one enemy in a given area is potentially able to see you, leaving you standing there stupidly for minutes on end waiting for a “vision gap” to sneak through.

That said, Art of Theft is not a bad game either. Despite occasional frustration due to the aforementioned niggles, the game has a lot to offer – it’s unique, it’s challenging, it’s highly replayable, and above all, it’s fun. It’s definitely worth checking out just to see how far the AGS engine can be stretched with a little skill. Overall, if you’re willing to work past the occasionally finicky controls, there’s a lot to recommend here. Give it a shot.