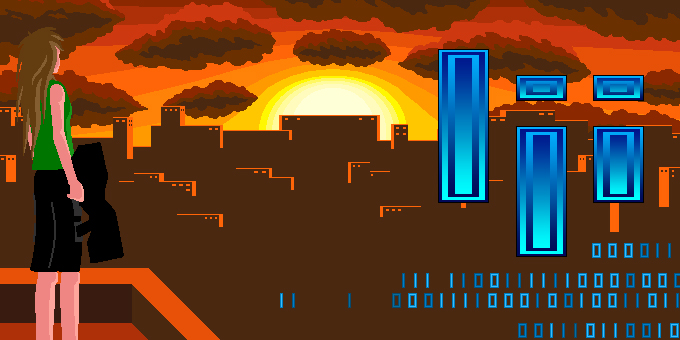 This article originally appeared in Dev.Mag Issue 28, released in January 2009

Here goes: if one were to attempt classification, Iji could be described as a “Nonlinear Action RPG Platformer”. It borrows thematic and gameplay elements from System Shock and Deus Ex, marries them with tactical platformer gunplay a la Blackthorne, and presents it all using the same basic polygonal graphics that made Another World so visually distinctive.

Whew! Quite a mouthful!

No, this isn't a 4-chan meme photoshopped onto a skyline; it's an alien take on Mutually Assured Destruction. Without the em.

Sadly, a side effect of relating a game to existing titles is that it makes the reader think that the game being reviewed consists of nothing but cheap borrowings from the games it’s being compared to. This does the game a great disservice, especially if it does a particularly good job of melding all those borrowings into a cohesive and entertaining whole. Iji takes all its influences, mashes them together very nicely, and adds some little touches of its own that make it highly distinctive. But enough of that – it’s time to tell you WHY.

Iji’s story begins with the title character and her family touring the military research complex where her father works. This is rudely interrupted when a hostile alien race hits the Earth with a somewhat sudden and unprovoked orbital bombardment. Six months later, Iji awakes from a coma to find that the military complex has been completely overrun by the aliens, and that she has been infused with reverse-engineered alien nanotechnology by the few surviving scientists. It’s up to her to strike back against the invaders and, through whatever means available, get them off what’s left of Earth. 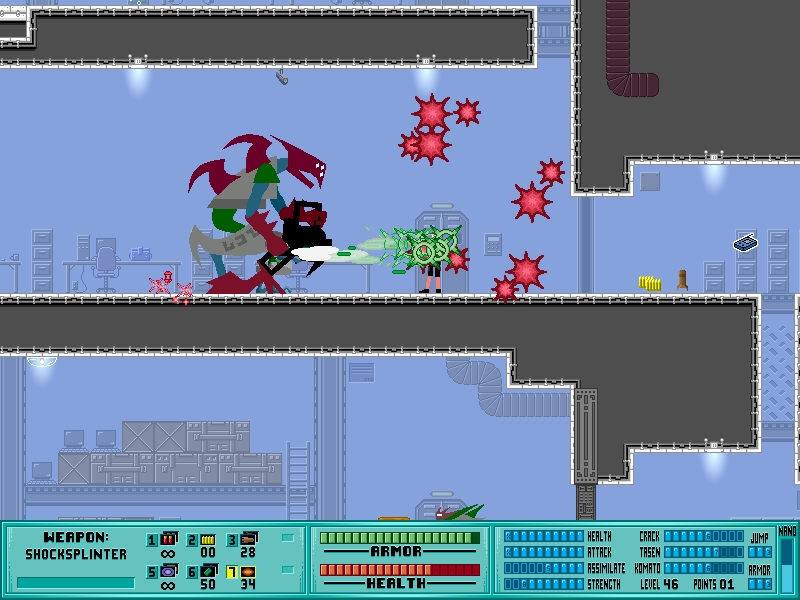 So yes, Iji is part action platformer, and in that it’s little different from any other action platformer you may have played. You guide Iji through the ten Sectors of the military complex, jumping from floor to floor and shooting increasingly nasty aliens with a growing range of weaponry. Her repertoire of moves is pretty basic – jumping and crouching. Crouching allows nastier enemy projectiles to zip harmlessly over her head, and is ideally performed behind cover to prevent fire from weaker weapons and melee attacks from reaching her too. However, unlike in other games of this type, she is unable to fire her own weapons while either crouching or in mid-jump. This can become annoying in some situations, but eliminating these abilities makes tactical placement and weapon selection all the more crucial to your survival. You can’t just pull off the old “crouch ‘n’ fire while the aliens shoot uselessly over your head” or “jump to the next floor level, fire at enemy in mid-jump, fall into cover” maneuvers, and this forces you to think your firefights through a little more carefully, especially against larger, stronger adversaries.

Fallen foes leave behind residual nanite swarms, known in the game as “Nano”. Once enough Nano, which can also be found as free-floating, nonlethal swarms, is collected, Iji gains a Level Point. As you progress through the facility, you’ll find special Upgrade Stations where you can trade Level Points for increased aptitude in the specific skills indicated by each station. Health and Attack skills provide more hit points and weapon effectiveness respectively. Strength allows you to shatter certain doors and send enemies flying with Iji’s Mighty Foot. Your aptitude with alien weaponry needs to be increased to a set level before you can use certain guns. Cracking gives you access to the hacking minigame, which allows you hack equipment containers, doors, and even lets you fuse weapons together to create more powerful variants. Choosing which skills to augment is an immense challenge at points, as all of them are incredibly useful and can dictate your path through the sectors, with all the benefits that brings in terms of access to weapons and collectibles. 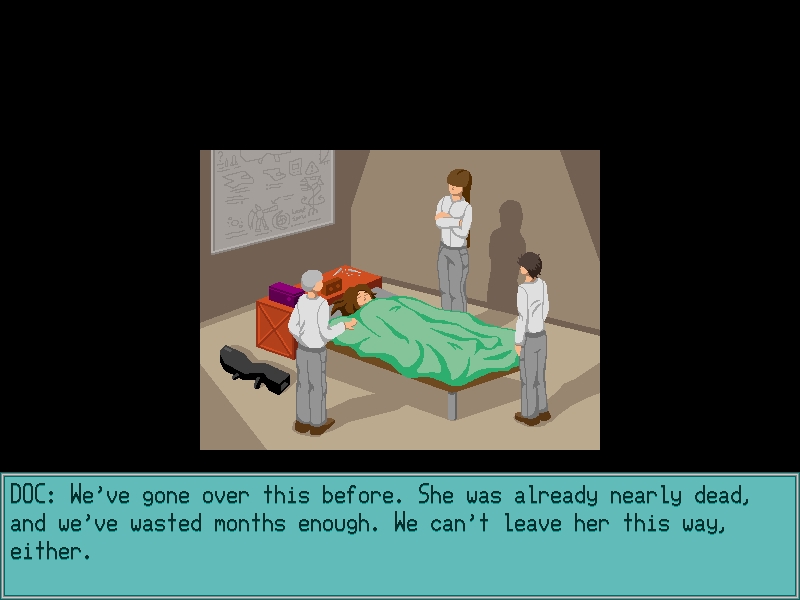 Iji’s story deserves special mention too. Presented through a mixture of semi-animated slideshow cutscenes, in-game dialogue and enemy notebooks (which also provide some humerous gameplay tips and “recipes” for new weapons), it’s certainly a lot deeper than one would expect from a game of this type, presenting some very interesting questions to the player regarding war and politics. Most intriguing is the effect that the player’s actions have on Iji herself and on certain aspects of the story. While the overall plot remains the same regardless, taking either a pacifistic, avoidant stance or an aggressive, kill-’em-all strategy alters in-game dialogue and the contents of enemy logbooks, and determines the presence of certain friendly characters later in the game. Iji’s in-game utterances will reflect her stance as well, with her either uttering apologies when killing someone, or letting out an impassioned “DIE!” when dispatching a foe. It’s a nice touch, making you feel like Iji herself is evolving as a character, and adds yet another tangible reflection of your chosen play style. 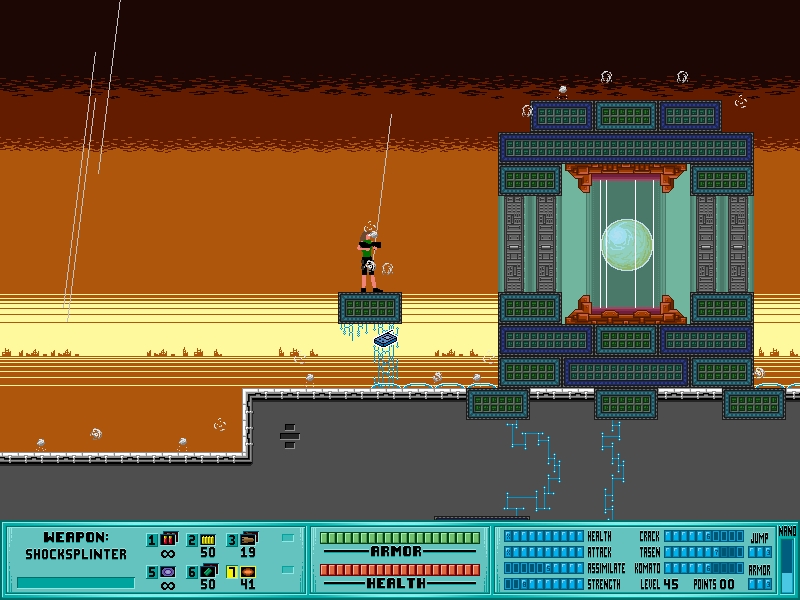 There remain two other honourable mentions one must make about Iji. Firstly, its replayability is superb, courtesy of both its nonlinear design as well as a wealth of hidden areas and unlockable content. Secondly, an absolutely incredible soundtrack that creates an amazing atmosphere for each of the levels (the final boss music and the credits track in particular must be heard to be believed). These two little touches of polish raise Iji above and beyond the regular Indie offerings, and make the game far better for it.

It’s hard not to gush about Iji. Daniel Remar has done himself proud with this game, creating something both fun and inspirational to individual developers everwhere. Not bad for one man using Game Maker.