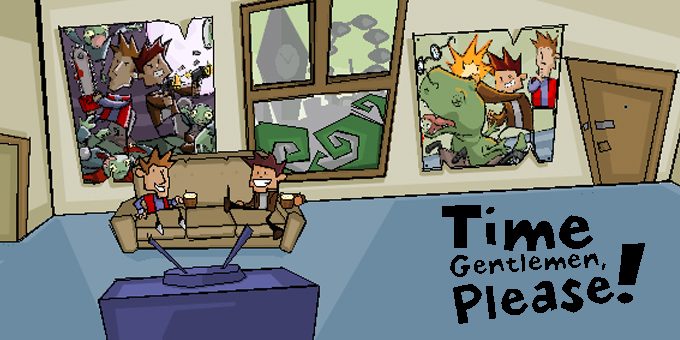 Last week, the editor brought to my attention a neat little adventure game called Ben There, Dan That!which was making its own little waves in the adventure game pool, at no cost at all. I was also directed to the fact that, as a result of adventure gamers going “OMFGWTF THAT WAS AWESOME!”, creators Zombie-Cow decided to follow up the, admittedly mini-, adventure with a full-scale release (read: sequel) – Time Gentlemen, Please!

Now, right off the bat, note that TGP is going to actually cost you something this time around (£3 to be exact – that’s $5-ish for the Americans, R40-ish for us Seffricans and about 240 rupees if you’re Indian) – but as we go on, I’ll show you exactly why this is a small price to pay for such a quality adventure.

TGP takes everything from BTDT and pushes it up several levels – the artwork is better, the puzzles are more challenging and there’s quite an engaging plot – but we’ll get to that in a bit. But what makes this so much fun is the self-referential humour that makes a fine return. It’s great when a game can be serious, without taking itself seriously. Oh, and the way the characters walk. That’s worth the price of the game alone.

Picking up two weeks where the last game left off (I’m not telling you what happens, go play it now, it’s free, you have no excuse), Ben and Dan are once again forced to do a bit of adventuring to rectify past mistakes, and prevent future ones. The game deals a lot with time, which makes for some really interesting puzzles, and on more than one occasion I found myself reveling in how intelligently some puzzles came together. The dialogues are full of funny references (and some innuendo and naughty words) and the characters you encounter are certainly colourful, to say the least (especially a certain pint-sized antagonist).

Simply put, if you liked BTDT, you will love TGP, and it is completely worth the money you’ll pay – and what’s more, paying means greater chance that more games will be made – which can only be a good thing. If love adventure games, and you have a couple of coins to spare, pick this up. Now.