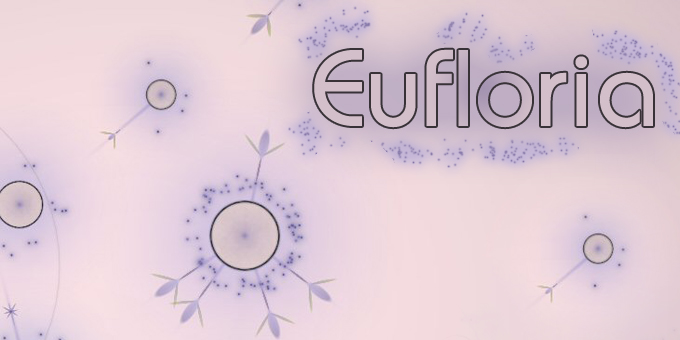 You may not realise it, but you’ve probably heard of Eufloria already. It made waves as a finalist in this year’s IGF Festival under the moniker of “Dyson”, and for all the reasons you’d expect. It has striking minimalist watercolour-styled graphics, beautifully atmospheric music and sound, and procedurally-generated assets. What really catches your attention, however, is its premise. It’s a real-time strategy game, where you create space colonies using trees.

In each mission (which is randomised to an extent each time you play) you’re presented with a sector of space filled with surprisingly round asteroids (think Little Prince), at least one of which is under your control. Your only unit, which doubles as “currency”, is the humble Seedling – a bio-engineered spore capable of interplanetary travel and packing a built-in laser cannon (!). By sacrificing ten Seedlings on an unoccupied asteroid, you are able to plant one of two types of trees to gain control over it. Dyson Trees spawn new Seedlings at a regular rate, while Defense Trees act as passive defense platforms, launching short-range explosive spores at any enemy Seedlings unfortunate enough to enter the orbit of the asteroid being guarded. The longer your trees survive the larger they grow, spawning Seedlings and missiles more regularly and becoming more resistant to attack. Fully mature trees also occasionally produce Flowers, which you can link to the adult version of either tree type to produce more powerful Seedlings or (my personal favourite) the dreaded Laser Mine, which can obliterate an entire attack force on its own. The number of trees you can plant per asteroid is capped at a different amount per mission, and once you plant you can’t go back, so planning which trees to plant is pivotal. 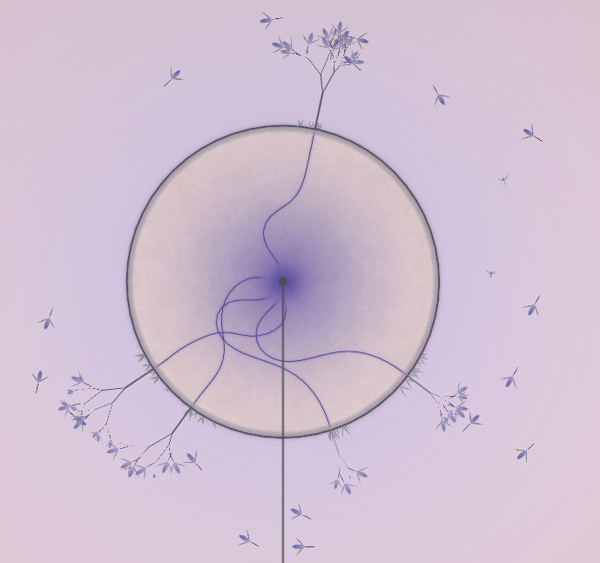 The asteroids that you control not only determine where on the map you can travel (since they’re used as pathfinding nodes by the Seedlings), but also determine the composition and strength of your fleet. Individual asteroids have three randomly-generated statistics which determine the characteristics of the Seedlings spawned on them – Energy (determining health and the speed at which enemy asteroids are captured), Attack (determining attack strength), and Speed. Acquiring asteroids with good stats and effectively utilizing the resultant Seedlings forms an important part of your strategy in the early-to-mid game.

If an asteroid is already occupied, then you’re in for a fight. Your Seedlings and the enemy’s will duke it out, with yours also attempting to destroy at least one enemy tree. A destroyed tree leaves a tunnel which allows your surviving Seedlings to burrow to the core of the asteroid and sacrifice themselves to convert it (and any remaining enemy trees on the asteroid) to your side. The destroyed tree is then replaced with a freshly-seeded tree of your own which, until it grows and gains sufficient damage resistance, leaves the newly-captured asteroid vulnerable to a counterattack. Depending on the relative sizes and composition of your Seedling “fleets”, these battles can get quite hairy, with multiple teams continually wresting control of the same asteroid from each other.

The interface is entirely mouse-driven and minimalist, given that movement and tree-creation commands are the only direct control you have over your Seedlings. The interface allows you to easily select exactly the quantity and type of seedlings you want on a per-asteroid basis, then send them to where you need them with minimal fuss (although a Rally Point command to automatically send freshly-spawned Seedlings to another asteroid would’ve been invaluable). Seedlings are completely autonomous when it comes to combat and asteroid capture. They generally handle themselves quite well in a fight, and they know to attack younger, more vulnerable enemy trees, but in some cases they’ll split up between targets, spreading themselves too thin to be effective. For the most part, however, they get the job done, and players who aren’t rabid micromanagers shouldn’t have any problems. 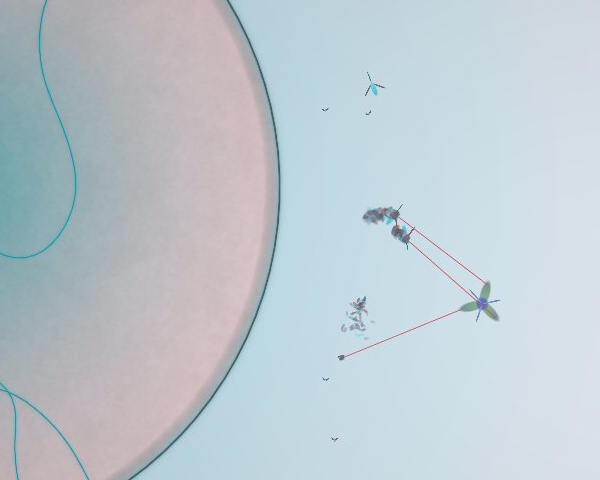 There’s very little wrong with Eufloria. It looks and sounds beautiful, the mechanics work well, the interface is clear and responsive, the missions are fun, the game feels balanced, and it runs wonderfully even on my ancient computer, with fleets of a thousand Seedlings cutting a swathe across the map without a single bump in the frame rate. Some players may find the randomization of the maps frustrating, although the extent of the shuffling is minor. There is, however, one particularly glaring niggle, and that’s the inability to save your game mid-mission. While your campaign progress is diligently tracked, you’re unable to save a mission already in progress. This is immensely frustrating because missions can take a long time, especially for cautious players who’ll work their way slowly and carefully through a map. Losing an hour’s worth of progress because you have to quit the game for whatever reason is never any fun. It’s not completely game-breaking, no, but it is an irritation.

Overall, though, Eufloria is worth the time of anyone who enjoys Darwinia-esque strategy games that emphasize tactics over resource gathering and unit production. More ardent strategy gamers may not enjoy its relatively simplistic gameplay or lack of micromanagement, but what gameplay there is, is tight, solid and enjoyable. There’s plenty of replay value too, not just in the map randomization in the campaign, but in the form of unlockable skirmish maps and a “Dark Matter” mode that allows you to replay the campaign maps with no objectives other than total annihilation and conquest. Besides, words simply cannot convey the glee you experience from watching a thousand seedlings flow across the map to obliterate your foes before they can retree… er.. retreat. That alone is worth the purchase.