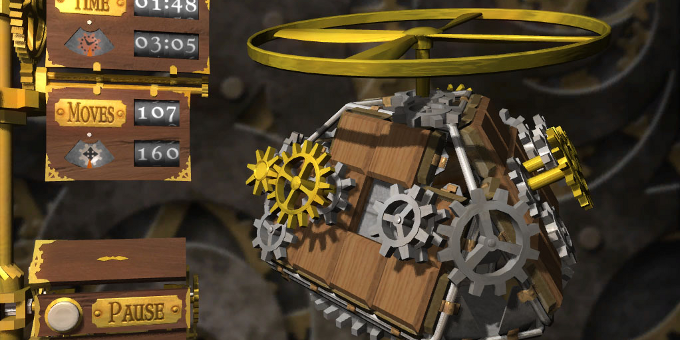 As part of our series of interviews on puzzle game design, we asked Rob Jagnow about his approach. Jagnow is the founder of Lazy 8 Studios, and the designer behind Cogs, the steampunk-themed sliding-tile puzzle game.

Cogs took the old sliding-tile game, and turned it into an absorbing puzzler. The player, instead of trying to make a picture, is fixing eccentric gear-based and steam-powered machines. The third dimension used in many puzzles adds another twist, making them not only trickier, but also more tactile. As you can see from the screenshots, Cogs is beautiful and atmospheric.

For its ingenuity and style, Cogs won the grand prize in the professional category of the Indie Game Challenge (2010), in addition to the Achievement in Art Direction and Achievement in Gameplay. It was also a finalist in the Independent Game Festival (2010) and Indiecade (2009). 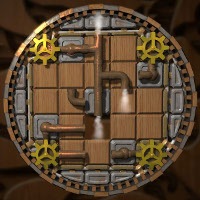 A good puzzle needs to walk a fine line between being challenging enough to feel like the solution took some effort without being so challenging that it’s frustrating to the player. Even better is a puzzle with a tiered award system that lets novice players finish the puzzle but still offers replay value and a good challenge for experienced puzzlers.

To design a good puzzle game, puzzles can’t just be considered in isolation. They need to progress in difficulty in a way that isolates specific concepts and allows for mastery of core concepts before moving on.

The core idea for each puzzle that I design usually comes from a concept that inspires me – often an idea that pops into my head while I’m out jogging, at the gym or in the shower. For Cogs, these ideas might be something like: “What if I put chimes on moving tiles?”; or “What would happen if I had a cylindrical playing board?”. 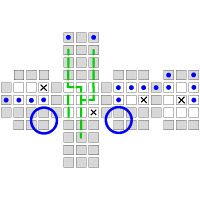 From there, I’ll often draw a puzzle in its solution form in Photoshop. For 3D puzzles, I unfold the board into a plane so that it’s easier to visualize. From that 2D design, I consider alternate solutions to the puzzle. Depending on how hard I want to make the challenge, I may add extra parts that are either useful to the user or that serve only as decoys. Finally, when I’m relatively confident with the design, I’ll code up the puzzle in the syntax that I designed for Cogs.

But that’s definitely not the end of the story. As the puzzle designer, I’m often naive about how difficult the puzzle will be. Puzzles that I think will be easy may turn out to be incredibly challenging when I share them with testers. To me, the biggest challenge in designing puzzles for Cogs was not making difficult puzzles, but rather making puzzles that ramp up in difficulty without feeling overly repetitive.

In the case of Cogs, for every mechanic that I added, the space of possible puzzles basically grew exponentially. I considered several additional mechanics, but in the end, I settled on a few core mechanics that were easy to understand and flexible enough to allow a lot of emergent behavior when used together. With a little creativity, you can get a lot of variety out of a small set of core mechanics.

Dev.Mag: How do you judge whether a puzzle is fun, and how difficult it is to solve?

As a puzzle designer, I often lose perspective of how difficult or fun a puzzle is, so I rely a lot on testers. In the beta version of Cogs, I asked users to play for a while and then report their stats back to me. Rather than just tracking the best time and move numbers for each puzzle, I also track things such as the number of times that each puzzle is attempted in each game mode and also whether the player gradually earned their way through the lower awards or jumped straight to the highest award. If you’re ever curious about this extended data, you can just type the mystats cheat code at any screen in the PC version of Cogs.

Dev.Mag: Do you use strategies in your design to guide the player towards the solution and help them understand the logic of the puzzles? 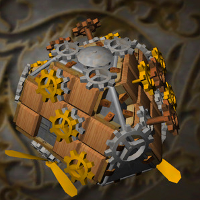 For many of the core mechanics, I create puzzles that are specifically designed to focus on teaching the concept. For instance, the first 9 puzzles in Cogs are intended to teach, in order: gears; puzzle rotation; pipes; chimes; stationary tiles; synchronization; balloons; engines; and two-sided puzzles. After that, I start combining mechanics and introduce new ideas more slowly.

For a long time, I considered having a tutorial that would teach specific strategies, such as swapping two tiles or thinking ahead, but in the end I found that very few people read any of the tutorial text at all. Instead I just tried to ramp up the difficulty over time, forcing players to learn various techniques on their own as they go. Some find this frustrating and don’t have the patience for it, but those who persevere to learn the tricks as they progress really appreciate the reward of earning their way through more difficult puzzles.