Home » Development » How to design levels for a platformer 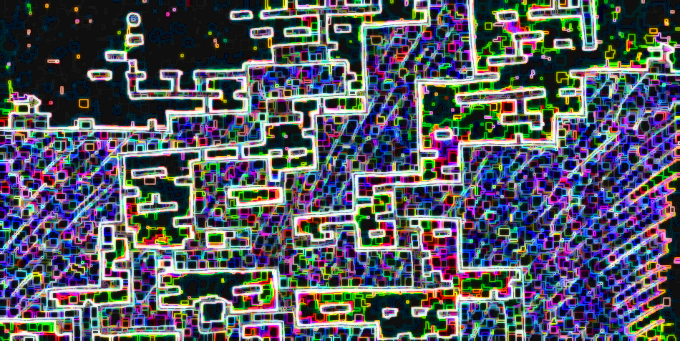 In a previous article, I gave you 11 Tips for making a fun platformer. That article had general tips that covered a wide range of game design tasks. This article looks specifically at the process of designing levels for a platformer. The process is a guideline and covers the steps from the initial idea to the final playable level.

The article does not focus on scheduling. However, you do need to keep scheduling in mind when designing levels. The size of a level and the amount of resources it contains depend on the number of people working on it, and the time available to complete it.

Choose a visual theme for the level. You can go with a predetermined, game-wide theme, such as ‘Forest’, ‘Ice’, ‘Lava’, or ‘Castle’. Or go for something more creative, such as ‘Steampunk Cloning Facility’, ‘Psychologist’s Nightmare’, or ‘Cupid’s Ice cream Parlour’. Ask everyone in the team for theme ideas.

Make a list of everything you want the player to experience in the level. This includes what the player does, sees, learns, hears, and encounters. The list should include specific items and general items.

Throughout the article the term ‘item’ is used to refer to the items of a list. These items not only include game items (power-ups, keys, and doors), but also events (finding the first locked door), enemies, and game mechanics (double-jumping).

Write down how many times each general item occurs (for example, there could be 50 coins to collect in the level, or the player might need to defeat 10 swordsmen). These numbers are estimates, and they help you to determine the level’s difficulty. For example, there could be two Tough Trolls in level 1, but four Tough Trolls in level 2. Let everyone in the team contribute to the list.

The following examples are also used in the images later in this article:

Draw a very rough layout of the entire level. This layout should show the path that the player will take through the level. Think of it as designing the street layout of a city, but ignoring the buildings.

You may end up doing several layouts before you have one that you’re happy with. Usually, the reason for changing the layout is one or more of these: 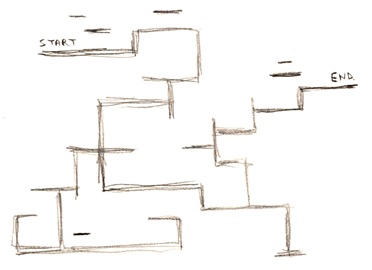 An example of the rough layout of an entire level.

Players will need to find each item in the list that you created in step 2 somewhere in the level. They might also find some items in the same area. Make rough sketches of each area in which the player will find the specific items in the list.

Use symbols to identify the various objects in the level, for example, E for ‘Enemy’, P for `Power-up’, and K for ‘Key’. Also make notes on the sketches.

These sketches help you focus on the layout of each small area, without having to worry about where they fit in the overall layout of the level. Think of it as focusing on designing a building and ignoring its location in the city.

You may make sketches for some or all of the general items, but it is not necessary. The general items are usually moved around when you design the detailed layout or play test the level, so they may end up in completely different areas than you originally planned.

Place as many of the general items in the detailed layout as you can. You can add the remaining general items when you build the level using a level editor.

When you place the items, keep in mind the path that the player will take through the level. Certain items may need to be placed in a specific order, such as a weapon being placed somewhere before the player encounters the first enemy. 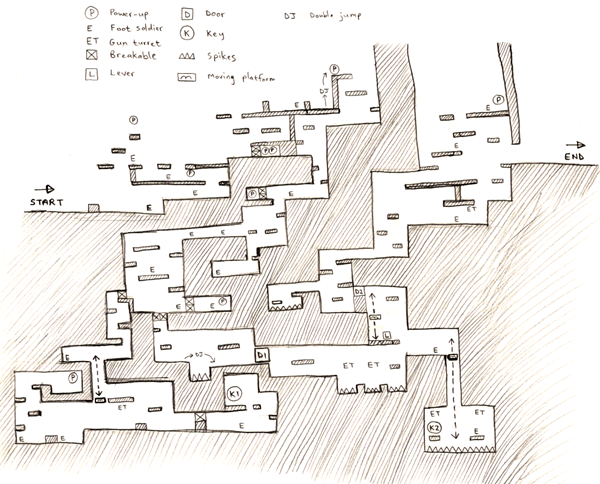 An example of a detailed layout. 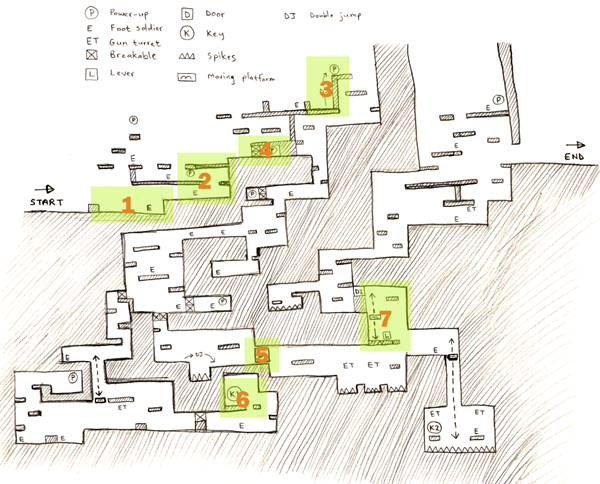 The locations of the specific items on the detailed layout.

Use a level editor to build the level’s initial layout, using the detailed layout (from the previous step) as a blueprint. You may need to change the sizes of some areas when you build the level. This happens because the layout sketch is usually not drawn exactly to scale. Also use the editor to add all the outstanding general items to the level. For example, your list might contain 20 enemies, but the detailed layout has only 15 enemies. Add the remaining 5 at this stage.

The initial layout is for playing the level, so that you can determine if it is fun and how long it will take to play through the level. Play the level and change the layout until is it fun and balanced. Let other people play it as well.

Changing the layout may include the following:

Important note: By the time you design and build your first level, you should already have prototyped and finalized the gameplay mechanics using temporary test levels. If your gameplay has not been finalised by this time, then you risk having to change your levels when the gameplay changes. For example, if you decide to make the player jump higher, then you will have to move many platforms to accommodate the new jump height. Changing fundamental gameplay usually has a ripple effect.

Once you’re happy with the level’s layout and once it’s fun to play, then add the details. This includes adding all the final graphics and audio. Play the level again to make sure that it still feels the same – or better – after all the graphics have been added. There’s a good chance that the level will feel different. It should feel better with the final graphics, but sometimes it may feel worse. For example, the placeholder background might have been a single colour, but the final background might be a detailed image that makes it difficult to see the enemies, in which case you will have to tone down the background or change the enemies, whichever will be quicker.

17 thoughts on “How to design levels for a platformer”