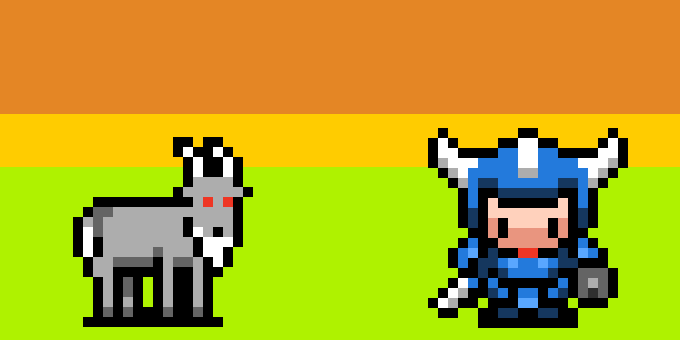 A little more than a year ago, Rodain Joubert, innocently, put his latest creation on the NAG forums for community feedback. Even the first, raw prototype was liked right away. It was immediately accessible, and surprisingly rich. The 10-minute games that were promised were inevitably stringed together into many hours of play.

And there was lots of feedback. New versions were released, and a good game was transformed before our eyes into something special. At some stage, the gurus Danny Day and Marc Luck from QCF Design entered the scene; more versions came out, and something special became something that was nominated for two IGF awards, and finally won the IGF Excellence in Design Award.

And right now, players across the globe are waiting impatiently for the full version.

Desktop Dungeons has been skilfully designed. Here we will look analytically at that design, and learn some lessons that we can apply to our own games.

If you have not played the game, you’d better do that before reading on. If you don’t, you will not only struggle to follow what is going on here, but the article might also spoil some of the game’s many surprises.

The Roguelike for Busy People

Desktop Dungeons is a hybrid roguelike puzzle game. From the beginning, the intention was to create a game that allows chunks of play that lasts for about 10 minutes. This places Desktop Dungeons in the subgenre that is sometimes called coffee-break roguelike games.

Of course, the connection is deeper as those few lines taken out of context imply. Despite its apparent simplicity, Desktop Dungeon has all the elements of a Roguelike (refined from the initial definition from the International Roguelike Development Conference 2008), except for unidentified objects: procedural environment generation, permadeath, turn-based, grid-based, and non-modal gameplay, multiple solutions, resource management, hack ‘n’ slash play, and exploration.

The other half of Desktop Dungeon is the puzzle element. In an interview Rodain talks about the idea of making a roguelike game that mimics Minesweeper. Indeed, before Desktop Dungeons, he released another prototype: Onslaught of the Electronic Zombies. This game combines Minesweeper-like information revelation with rogue-style attack. Although the way glyphs and monsters are revealed to some classes in Desktop Dungeons reminds of Minesweeper, the puzzle solving concentrates much more on resource management than it does on information management.

The player chooses a race, class, and challenge. The player is placed in a randomly generated, initially dark, dungeon. Scattered around the dungeon are monsters, power-ups and potions, magic glyphs, altars, and shops. The goal is to kill the boss of the dungeon: a level 10 monster. The game ends when the player dies or retires (before or after the player kills the boss).

Play sessions are short: 20-minute sessions seem typical, although they vary considerably. The player actions are

For a short game, this is a long list, and it already hints at the rich gameplay possibilities. In addition to the designed goal of the game, players may enter dungeons with other goals:

These three additional goals are not part of proper play, and they hint at design trouble. They are discussed some more under the sections Information and Progression and Balance and Difficulty in Part 2.

It is useful to divide a play session into phases, just like chess:

Use EVERY tool at your disposal. — Desktop Dungeons Tutorial.

Desktop Dungeons gives the player an incredible amount of meaningful choices to make, and this is really where the rich gameplay is evident:

The choices have been highly condensed: every move is one or more choices.

Most choices are difficult: choices are highly interdependent, and also depend on the current game state; every choice is a trade-off. Choices may have long-term consequences – often unknown to the novice player (see Information and Progression in Part 2). 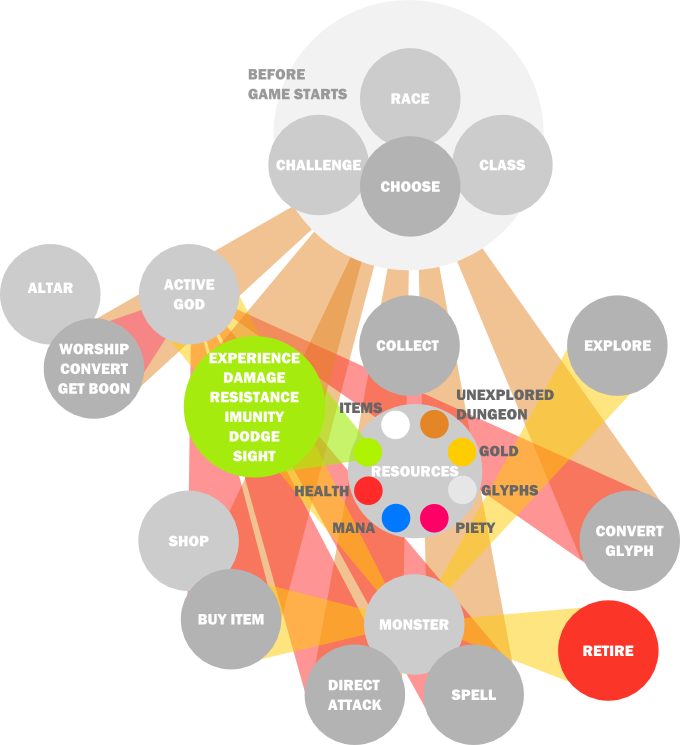 This diagram shows some of the relationships between actions in the game. The connections to resources have been left out; resources are involved in every decision. The point of the diagram is: everything is connected.

Followers walk an uneasy path. — On the altar of Mystera Annur.

The most important source of uncertainty in Desktop Dungeons is the level generation algorithm.

In a turn-based game where monsters do not attack without provocation, it seems like the tension in Desktop Dungeon should be low. But that’s not the case.

First, there is definitely a sense of urgency, created by the desire for discovering certain things in time:

Second, the uncertainty of the success in a medium- to long-term strategy creates more tension. The player can calculate the future to some extent, but is hindered by unknowns (especially when meeting new creatures and gods for the first time). The difficulty in making choices, and seeing the long-term consequences unfold as further decisions are made, lies at the centre of this tension.

Interestingly, this uncertainty increases as the player progresses through the game; as more monsters, spells, and shop items are unlocked, the game becomes more unpredictable. For an advanced player, the tension is not maintained by ever harder-to-beat monsters; rather, it is the demand on dealing with more and more types of situations.

Third, accidental or unexpected death contributes quite a bit to the uncertainty as the player learns the game, and is another source of tension. (The music that accompanies death is so sudden after the silence that the player may even be startled.) Even though the game is mostly deterministic, poor understanding of the exact rules or misinterpreting the interface can cause a player to attack and die, making the player all the more careful in subsequent games. It can be argued that this form of tension is unwanted and is caused by flaws in the interface design.

Once generated, the game is almost completely deterministic: the player can make choices with known consequences. However, there are exceptions (chosen by the player, not thrown at him by the dungeon master) that allow a fun, tenser experience for the strategic gambler:

The tension throughout the game is not constant, nor does it increase steadily. In addition to the variety caused by specific situations, there are also variations that occur because of the structure of the game. The tension is high at the beginning of the game, when the chances of getting trapped are high. The tension also increases just before levelling up, as the player wonders whether he will survive until then without unnecessarily using up valuable resources. Tension increases when preparation for attacking the boss starts, and increases up to the point the point of the attack. Even though most players will only start an attack on the boss when it is sure to succeed, the tension is not completely dissolved, as there is still the chance that something was overlooked or miscalculated.

An illustration of how the structure of the game contributes to the overall tension. No situational influences are shown, and the actual tension graph will of course differ from game to game.

In Part 2, we will look at issues such as balance, progression, information, conflict, and narrative.

Thanks: Diorgo Jonkers and Jacques Jurgens for valuable feedback.